OK people, the sun is out which means it is time to say sod it to our age, act our shoe size and eat ice lollies. But since we’re not children any more, let’s add some booze into the mix. Why? Because we damn well can. Grab yourself some gin and tonic ice lollies, get outside and let’s do summer like we’re supposed to!

Yes, we’ve been having a lot of good weather lately, I’ve had some time off and I’m full of the joys of life. I’ve also just had two of these ice lollies, but that’s clearly not relevant here…

I’m quite a fan of a gin and tonic, it’s my go to drink in most situations (unless it’s sunny and there’s Pimm’s about), and to be honest it’s just the best. On it’s own it’s a pretty summery drink, but given that it’s cool and delicious, you can drink it a little too quickly which leads to, uhm, we’ll let’s not talk about that. Since just drinking it in larger glasses isn’t going to solve the problem – believe me, I’ve tried – I thought I would try freezing it. I’ve spotted quite a few ice lollies on Instagram lately, and to be honest gin and tonic ice lollies just sounded really good. Here’s hoping you agree.

The main issue is how to make them sweet enough to be enjoyable as ice lollies, but not so sweet as to alter the flavour too much. To get round this I’ve added in a sugar syrup. It’s dead easy to make – it’s similar to the one I made for my peach iced tea – and also has the added benefit of really bringing the flavour of the garnish to life.

The gin I happened to use here tends to pair very nicely with cucumber (since I don’t need BBC levels of impartiality, it is clearly Hendrick’s). But there’s a whole world of garnishes out there to explore, and this recipe will work with most. Remember, when you make the syrup just leave a few pieces to one side to add into the actual moulds. Depending on your gin, your garnish can be almost anything, but here I would suggest either cucumber or something citrusy – limes, pink grapefruit or orange will work a treat. 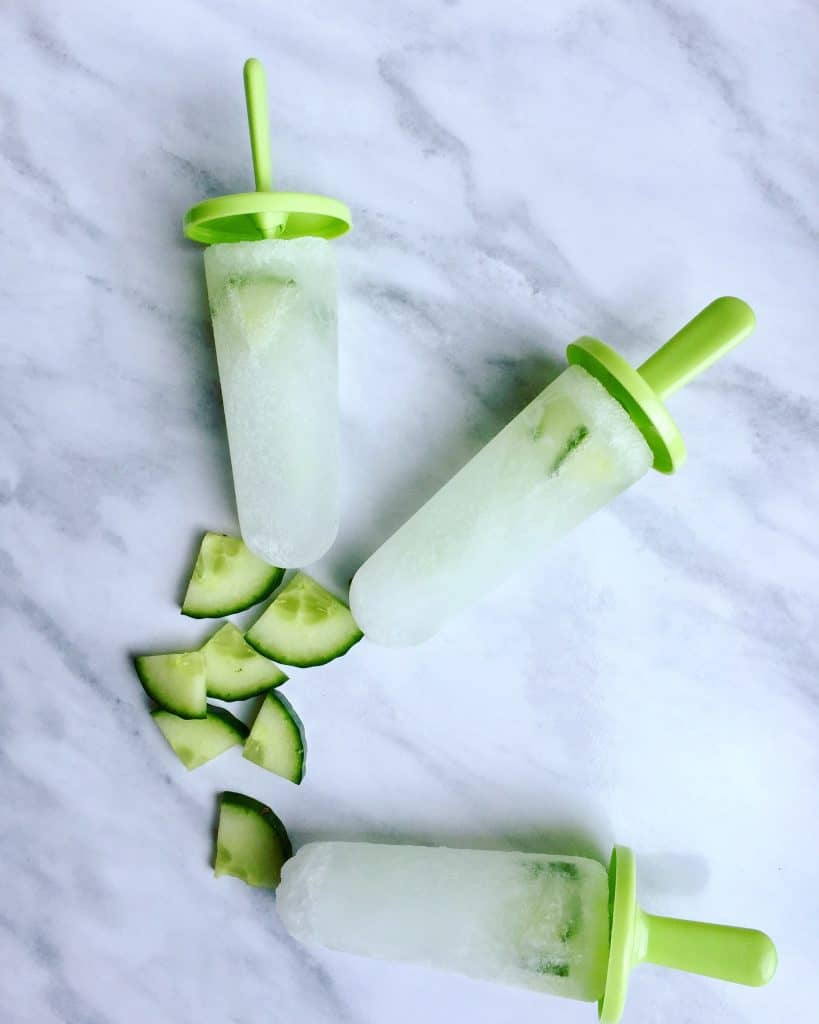 This is a brilliant recipe, and only contains five ingredients. It’s quick to make, but you’ll have to do it well ahead of when you want to eat them so there’s time enough time for them to freeze. Also, whilst it’s tempting to add more gin, remember they won’t freeze if there is too much alcohol (if that does happen though you’ll have a gin and tonic slushie, so not a total loss!). It makes six ice lollies – scale according to how many are in your mould. I just bought a cheap set of moulds from Amazon, but you can grab them most places.

Start by making the syrup. Chop your cucumber into discs and quarter those discs. Put most of them in a small pan (leave about 3 discs worth out to put in the actual moulds), and to the pan add the sugar and the water. Put the pan on a medium heat and, gently stirring, heat until the sugar dissolves. Take off the heat and set aside to cool.

In a jug, mix together your gin, tonic and (cooled) cucumber syrup.

Carefully pour this into your ice lolly moulds – leaving some room at the top as the liquid will expand when it freezes. Freeze for an hour or so and then add the remaining cucumber pieces into the moulds. Freeze for another four hours, or overnight if you can.

Run under warm water to release the moulds, if they don’t slide off, and then serve.