Crisps are one of those products that we eat without thinking about. They’re just there. We snack, we nibble, we crunch as we nod sagely whilst paying rapt attention to what people are saying at networking events. They’re a multi-million pound industry and in recent years we’ve seen a huge rise in ‘gourmet’ crisps (the ‘fancier’ the flavour, the higher the price ticket, naturally). But this is not an exposé on the crisp industry, it’s a story about how the other day the phrase “Oh you know, I just made some sweet potato and harissa crisps” came out of my mouth when a friend called to ask what I was up to and I realised that I am a ridiculous human being. Because apparently that’s not a normal thing to do on a Wednesday evening.

Actually, that’s pretty much the entire story, but it sums up so many things about my life. 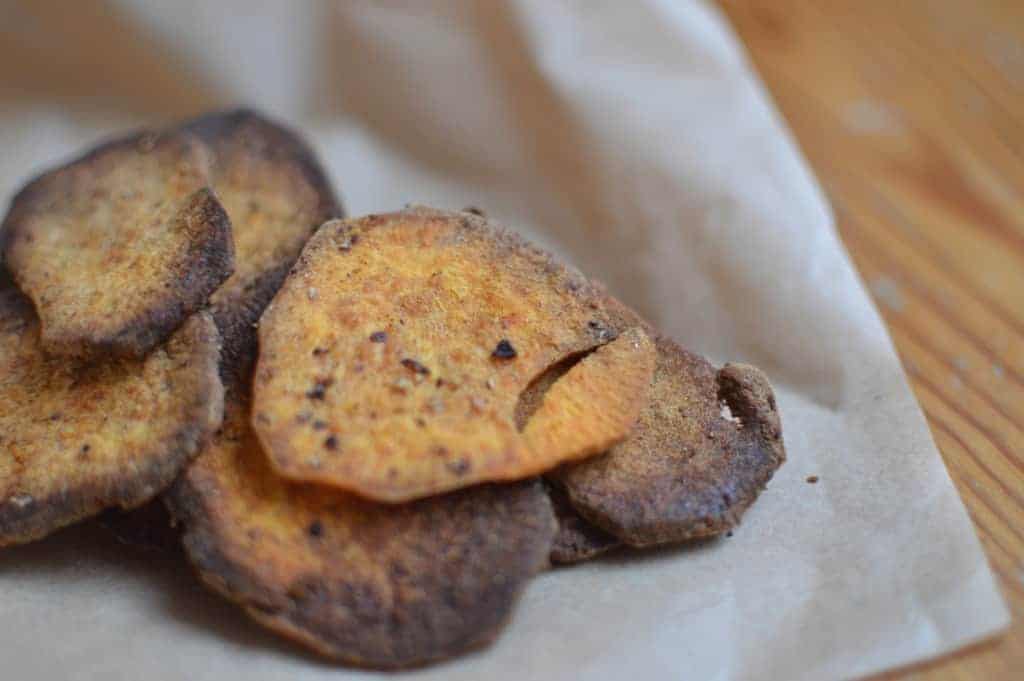 There seems to have been quite a trend for homemade crisps in recent months. Be their kale, beetroot or parsnip, making your own seems to be very much in vogue. There’s no apparent cause for this sudden crisp revelation, but much like the increasing awareness of ‘hidden’ sugars (I’m all over this particular bandwagon with some delicious roasted tomato soup that cuts the additives out), the realisation of what exactly is in this go-to snack seems to be playing on people’s minds. And of course there’s an easy way to know exactly what’s in something – make it yourself.

My flavour combination started from my on-going affair with sweet potatoes – they are appearing very regularly for no particular reason at the moment, apart from their deliciousness, most recently on the blog going into a gratin – but was completed by the rediscovery of some harissa salt at the back of the cupboard. I came across ‘magic’ spring-loaded salt grinders last summer at a food festival and after getting a second one at Christmas I now have a range of different salts. Of these the harissa has become a firm favourite because it just brings a totally different dimension with it. It also happens to make these crips ridiculously more-ish. Sorry about that. 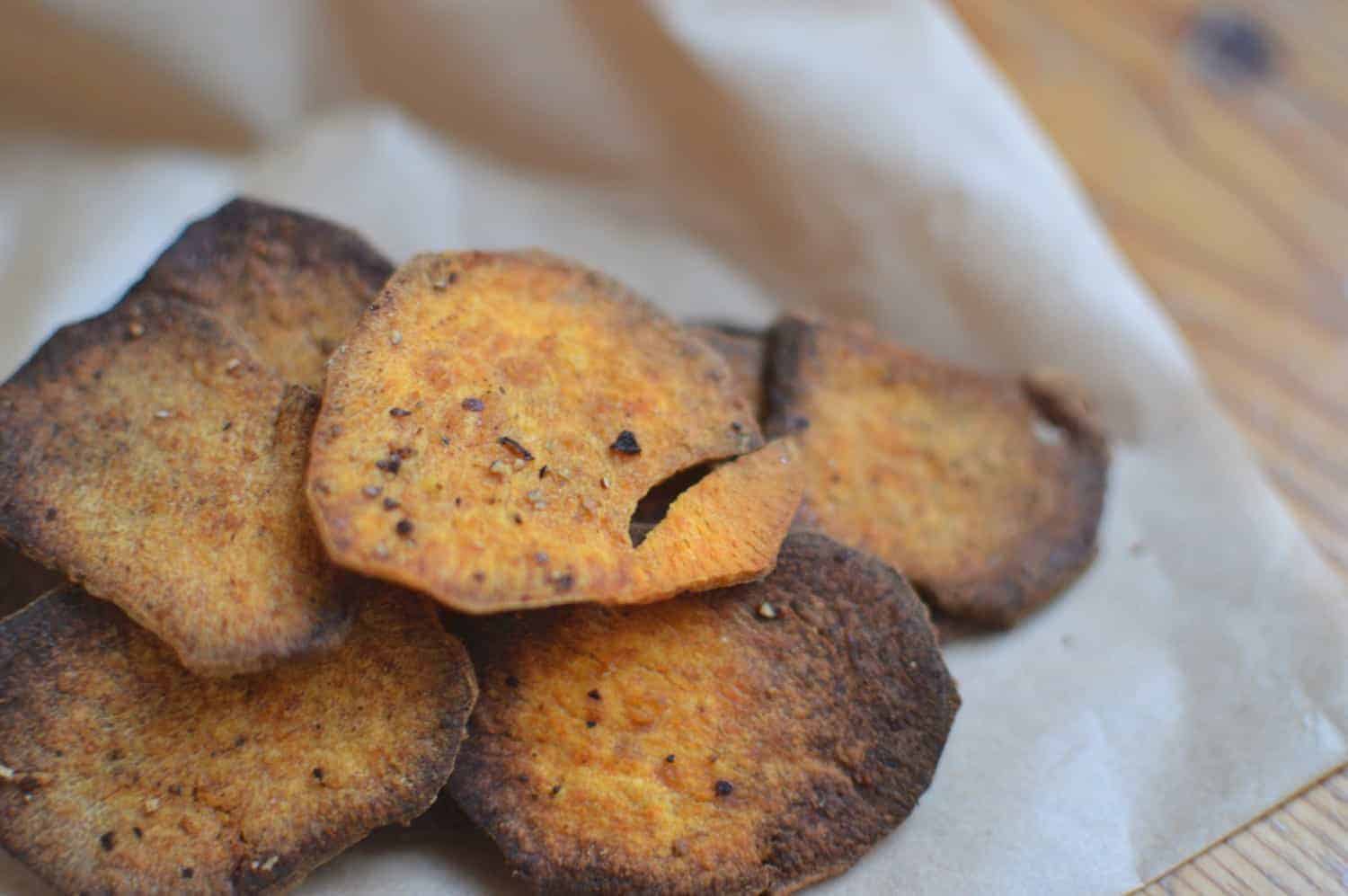 This recipe is an original to The Usual Saucepans, but takes inspiration from many around the internet including this one for Beetroot Crisps from Dom at Belleau Kitchen. It makes roughly two trays worth of crisps, which we demolished between two of us one evening with the help of a tub of hummus.

Firstly line the tray you are going to bake the crisps on. It needs to be quite spacious, so two is probably a good plan, or us the grill with the wire rack in it, like I did. You can use baking paper or foil, but the paper is easier. Heat the oven to 170ºC.

Peel the sweet potato and then slice it really finely – I used a mandolin, but a really sharp knife will do the trick. Once all sliced, put into a bowl. Pour over the oil, harissa salt and pepper (I grind it fresh for maximum flavour), then get your hands in there and mix it all together.

Lay all the slices out on the prepared trays, ensuring that none of them overlap. Put them in the oven and let them bake. If you’ve used a mandolin you’ll have to watch them like a hawk – I left mine slightly too long and they were a little crispier than intended (although I like them like that, so worked well for me). Let them bake for ten minutes on one side and then take them out and turn them.

Once turned put them back in for about 8 minutes, then turn the oven off and let them cool in there. If you’ve cut them by hand, they’ll take a little longer (like 12 mins on the second bake). Allow to cool completely and then taste to check the seasoning. Add a little more if required, then eat and enjoy! 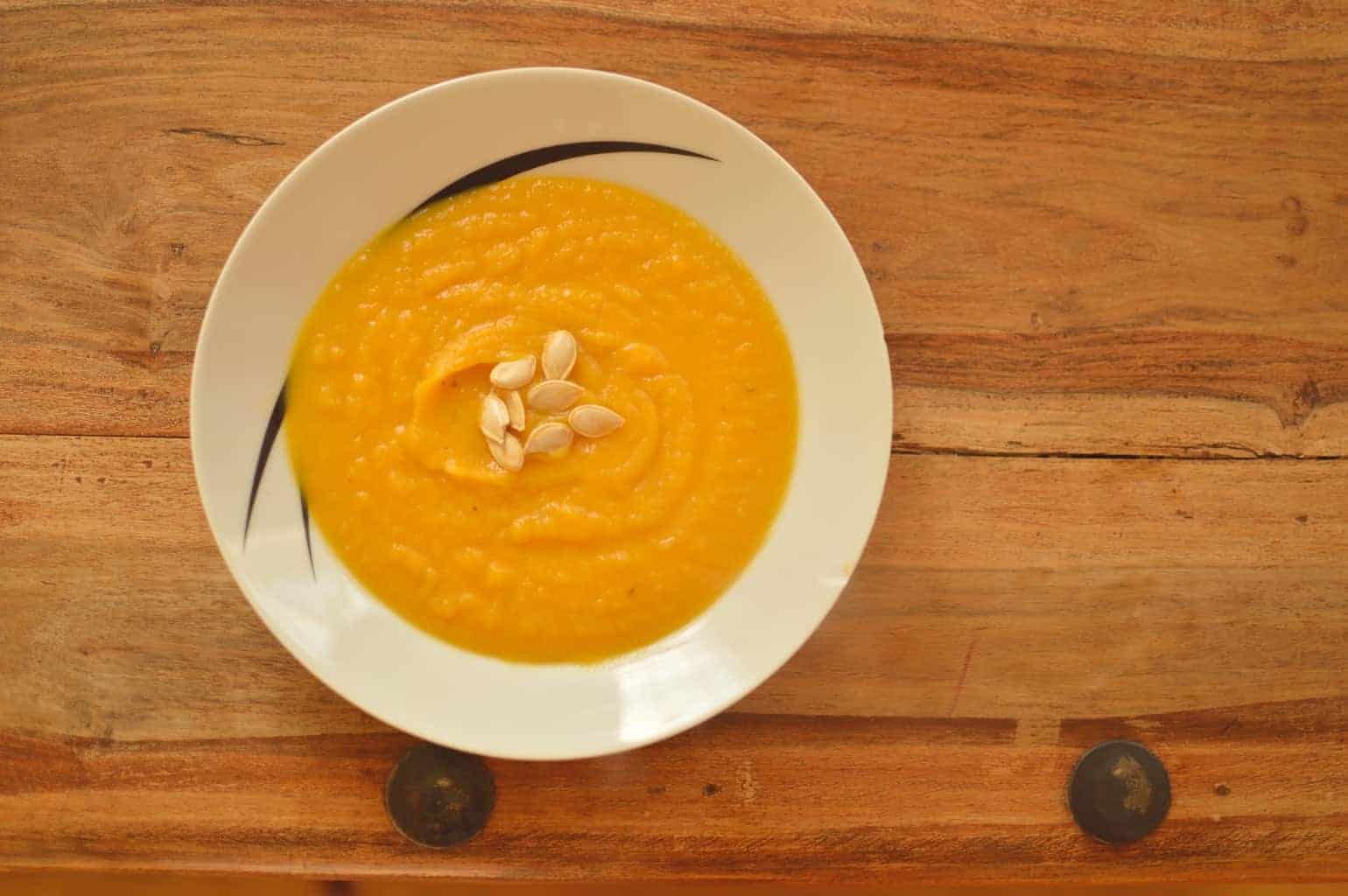 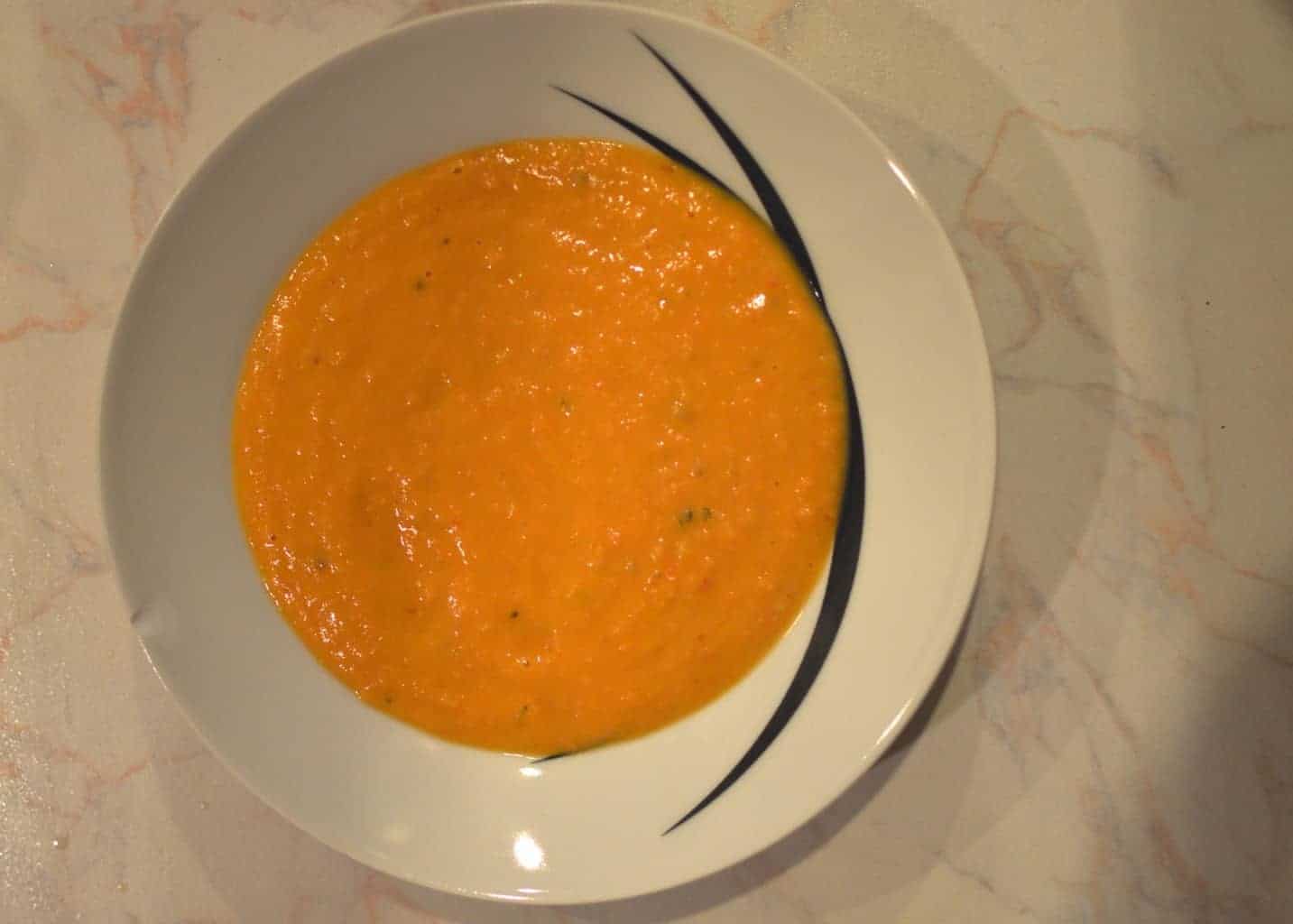