The only things I wish could have worked out better for this recipe was a slightly thinner crust and to be able to think of a better pun to go with it.

This recipe came about through a continuing love of the Great British Bake Off and a slight disaster. The first I feel doesn’t need explaining, but the latter is one that any food lover will have an intake of breath over – we had a freezer failure.

Lots of melting and thawing took place from Thursday night into Friday – there doesn’t appear to be a cause (although I suspect the door didn’t properly shut on Thursday night) but what is certain is that when I got home on Friday evening there was a large puddle on the floor and pretty soon after I was feeling around to see what might be salvageable. Thankfully only the stuff at the very front was beyond salvaging – some chicken, stock and a few now very mushy bagels. Remarkably most of it was still frozen or at worst half thawed. Whilst the few casualties found themselves in the bin, I found myself facing the turmoil of having to eat a package of smoked salmon, some game stock and a pack of mixed game over the weekend. I feel it could have been worse. 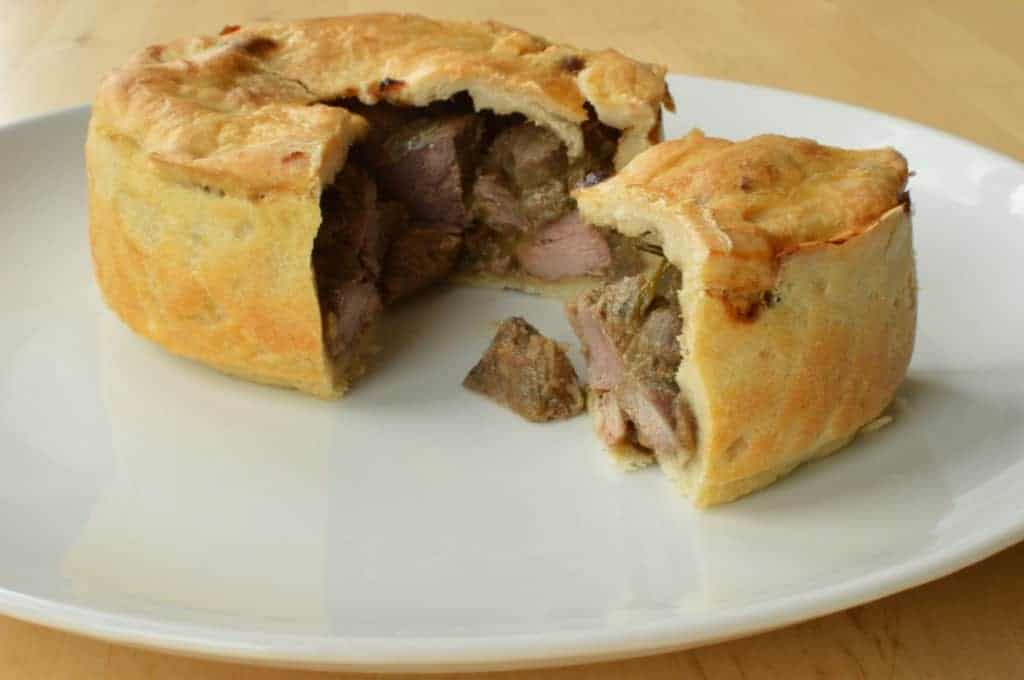 Last week on the GBBO it was pie week and when one of my friends was over to watch we ended up talking about how neither of us had ever attempted a hot water crust pastry. Now I had a free weekend and needed to use up some game – a plan was hatching.

I was a little too liberal with the recipe and so it’s far from a perfect hot water crust pastry – I doubt Paul would be overly impressed – but it was pretty delicious. My stock was (I think) left over from a stew that was a drowning a little, so it was put in a pan to reduce down and the cubes of meat (venison, rabbit and pheasant in this particular pack) were cooked alongside a little onion and garlic, with a generous splash of red wine. A perfect pie it may not have been, but it was far from a pie-tiful attempt. 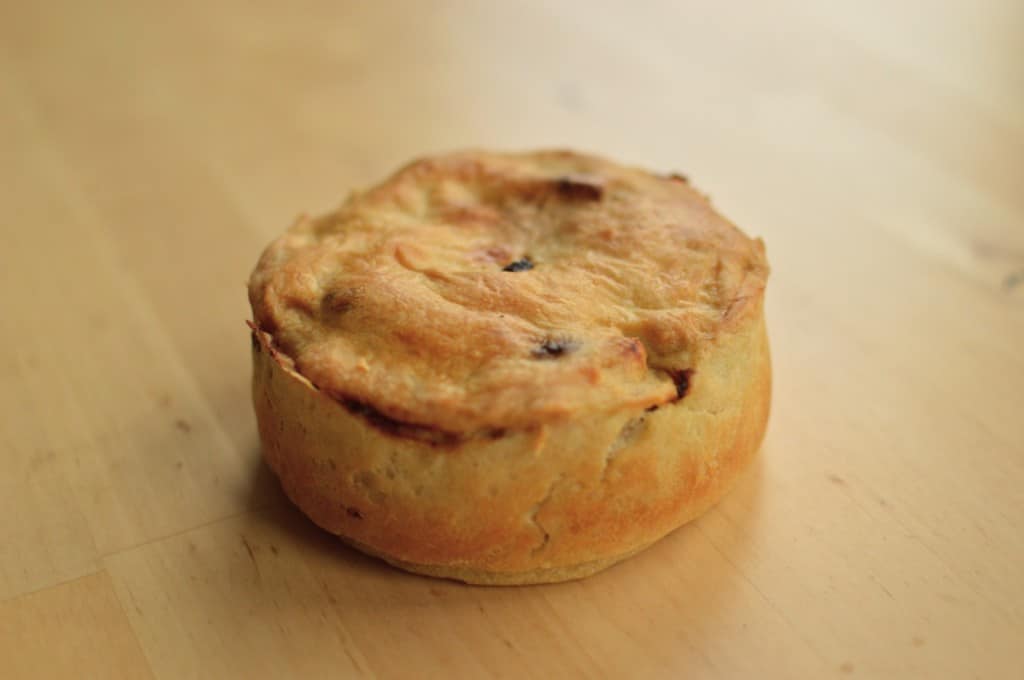 This recipe is an original to The Usual Saucepans, although the pastry recipe is adapted from one in the book that accompanied the second series of The Great British Bake Off. It makes enough to feed four. My stock came from a previous stew, so was full of vegetables – if yours isn’t, then carrots, mushrooms and parsnips would all work well. It serves four.

Start off by making the filling for your pie. My pieces of game were fine to be cooked relatively quickly, but if yours are more for a casserole, then cook them in a slower, gentler way.

Get a large, heavy-based pot and put the oil in the bottom, place on a medium heat and gently brown the meat. Once it is thoroughly browned, dice up your onion and garlic then add them to the pot and soften them (without browning). Add in vegetables at this point if you need to.

Whilst the pan is hot and relatively empty, pour in the wine and allow the alcohol to burn off (my 50 ml was probably nearer a whole glass) for a minute before adding the meat back in along with the stock and herbs. Cover and turn the heat down so it is just cooking gently. If your meat needs longer, do this in the oven over an hour or two.

To make the pastry rub the butter into the flour until it makes a crumb. Add the slat in and then pour in the water (make sure it is boiling hot). Stir with a spoon gradually mixing the flour in to form a dough. When it is cool enough, turn out onto a floured work surface and knead until smooth.

Spilt the dough so that one third (for the lid) can rest whilst the remaining two thirds (base and sides) is rolled out to a thickness of no more than 5 mm. Use this to line the base and sides of a spring-form cake tin (I did mine as two pies in 12cm tins).

Fill the pie casings up with the filling (try not to use it really hot as it will melt the fats in the pastry) and then roll out the remaining pastry for the lids. Brush the rim of the pastry with beaten egg, to act as a glue, then put the lid on the pie. Brush the top with some more egg and poke a hole in the centre to let any excess steam out.

Bake in the centre of the oven at 180°C for 30 minutes, then turn down to 150°C and leave to bake for a further half hour.  The pastry should come out a deep golden-brown. All to cool fully before serving.