From Sachertorte in Vienna, to fresh pineapple in Antigua via many other delicacies, I’ve had the good fortune to try out many a local favourite in the places I’ve visited around the world. So when I was in the US towards the end of last year it’s probably unsurprising that I decided to try out a few local delicacies.

Well, New York can keep its hot dogs – they were not what I would call tasty – with mustard, Tommy K and a plastic roll. But when it came to stop number three of my trip – Philadelphia – I found something that, quite honestly, sounded like another disaster waiting to happen – the Philly Cheesesteak.

For the uninitiated, here’s the lowdown: it’s a lots and lots of shredded fried steak with fried onions, sometimes mushrooms, covered in cheese (or rather, what passes for cheese in the US) all piled into a cut baguette, to soak up all the oil. And boy is there a lot of soaking up to do. There’s also a thing called ‘Whiz’, which is allegedly cheese, that you can have on top, but it comes in a squeezy-mustard consistency (and not a hugely different colour – or should that be ‘color’?) My adventurous-ness drew the line just before it. 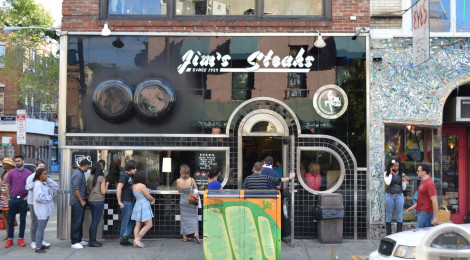 Well, it might not be the most outwardly appetising of ‘snacks’, but I was told that Jim’s on South Street (in Philly) was the place to go and so whilst ambling past one afternoon I decided to join the huge queue outside. Queued down the block at half three in the afternoon, I thought, well it must be worth a shot.

Turns out the cheesesteak is DELICIOUS!

So when I came home I said I was going to try and recreate – and hopefully improve – the cheesesteak at the first opportunity. Five months later, I’m sorting out the final details of another trip to the US (I know, I know – it’s for another wedding though) and have only just got around to having an attempt. Oh, but what an attempt – even if I do say so myself.

Substituting in a proper cheese (Gouda, in this instance) and some good bread, a little less oil and slicing my steak instead of shredding it (out of pure laziness), it’s not exactly the most authentic version, but it was delicious none the less. Heaven has a new flavour. 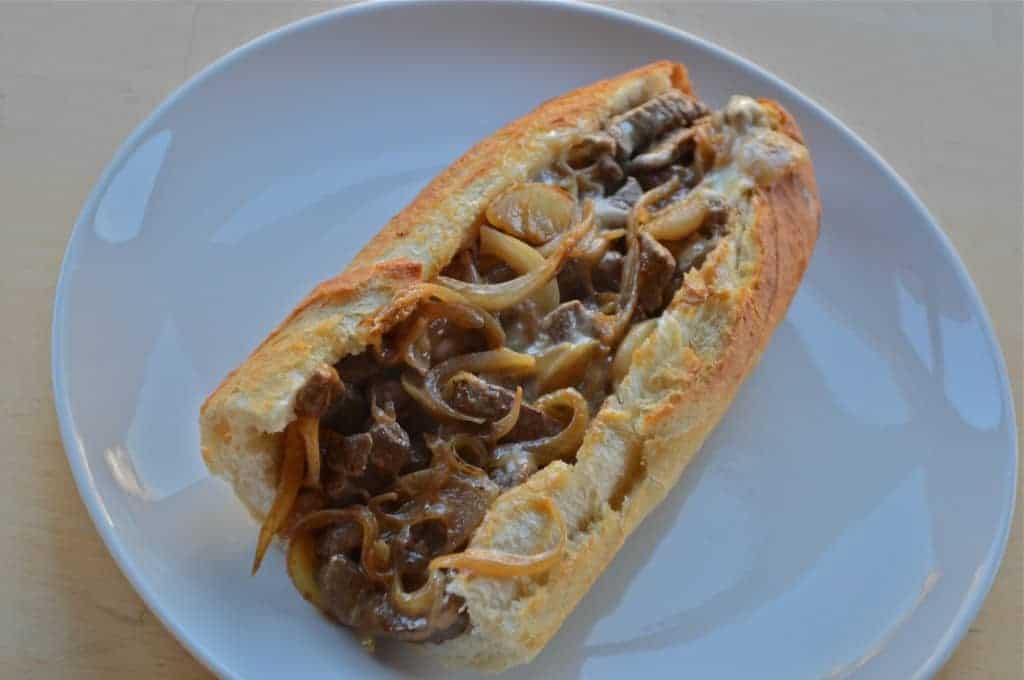 Well, this is an original recipe from The Usual Saucepans. It’s based on my trip to Philadelphia in October 2013 and a visit to Jim’s Steaks on South St. Philadelphia. It serves one. Greed and speedy consumption optional. If you wanted to go a little healthy with this try it with roast veg – although it does kind of defeat the point. 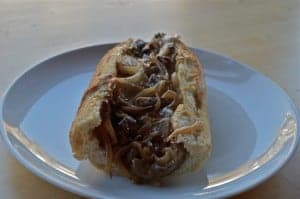 Get a very sharp knife and slice your onions – root to tip, for the longest strips – and then your steak so the strips are as long and thin as you can get them.

Put a large frying pan on a medium heat and heat up the oil. When sizzling, add in the onions to soften. After a minute or so add in the steak strips. Allow to sizzle whilst you slice the cheese really thinly.

When the beef is cooked, turn off the heat and add the cheese on top of the mix. Once melted, mix a little to ensure even distribution, arrange into a rectangle. Slice the bread lengthways, then spread it open and place down on the steak, ensuring it covers it all. Place one hand on the bread and grab the handle with the other – flip, close and stuff into your mouth.