Pancakes must be sweet? What utter crêpe

I mean, it’s called ‘Fat Tuesday’ (if you translate Mardi Gras) – it’s practically a command to eat lots and lots of pancakes. And although I’m not one for taking orders, this is one I can get on board with.

There’s huge amounts of tradition around pancake day – the purge of all the rich and fatty foods in your larder before the austere days of lent – but if I’m perfectly honest, I’m just going to take the good parts. I’m not a huge one for denying myself what I like for reasons I don’t really believe in, so although this celebration is meant to be a time of minimalism in your diet (and beyond), I’ll just be joining for the pancakes and then the chocolate and Easter feasting at the end. Hypocritical? Possibly. Downright lazy? More probably. But for now let’s just talk about crêpes, and good luck to anyone testing their will power over the coming weeks. 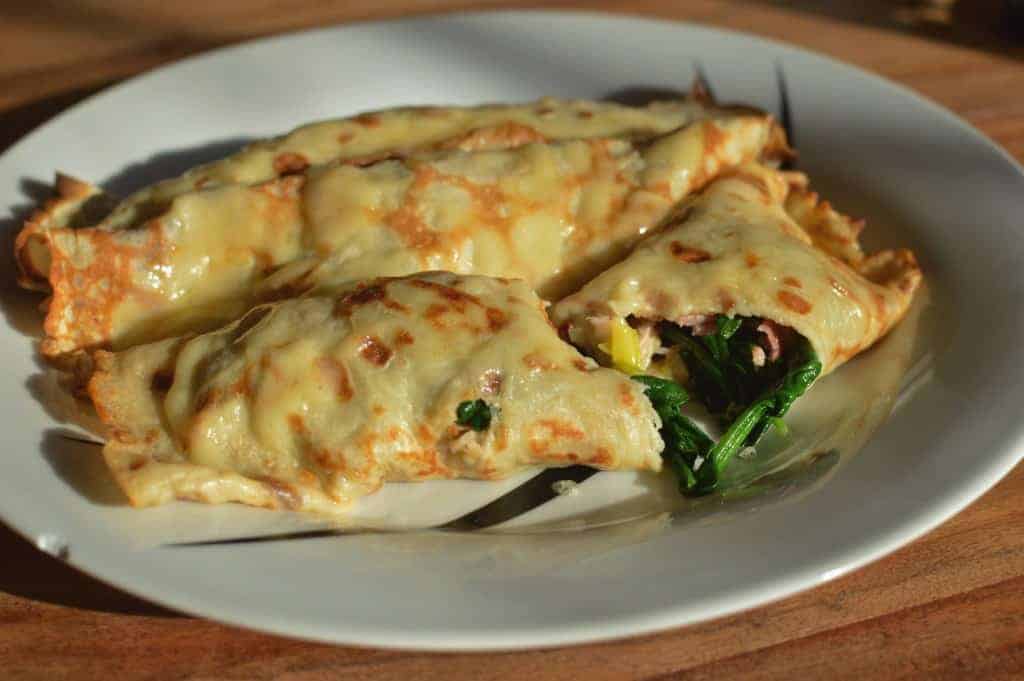 But back to the pancakes. This week sees Pancake Day (Mardi Gras, Shrove Tuesday, whatever name you call it) which has got to be one of the best food days in the year. Pancakes are more often seen as brunch fodder, but who would turn down the opportunity to have them for dinner as well if the excuse arose? Not me, that’s for certain.

I’ve made pancakes several times on the blog – most recently it was oat, chocolate and banana – but it’s been a while since savoury crêpes were on the menu. Since my love for Pancake Day runs deep, I go with savoury and sweet for the day – there’s so much more potential than just smothering them in Nutella for dessert (although there’s also nothing wrong with doing that either). 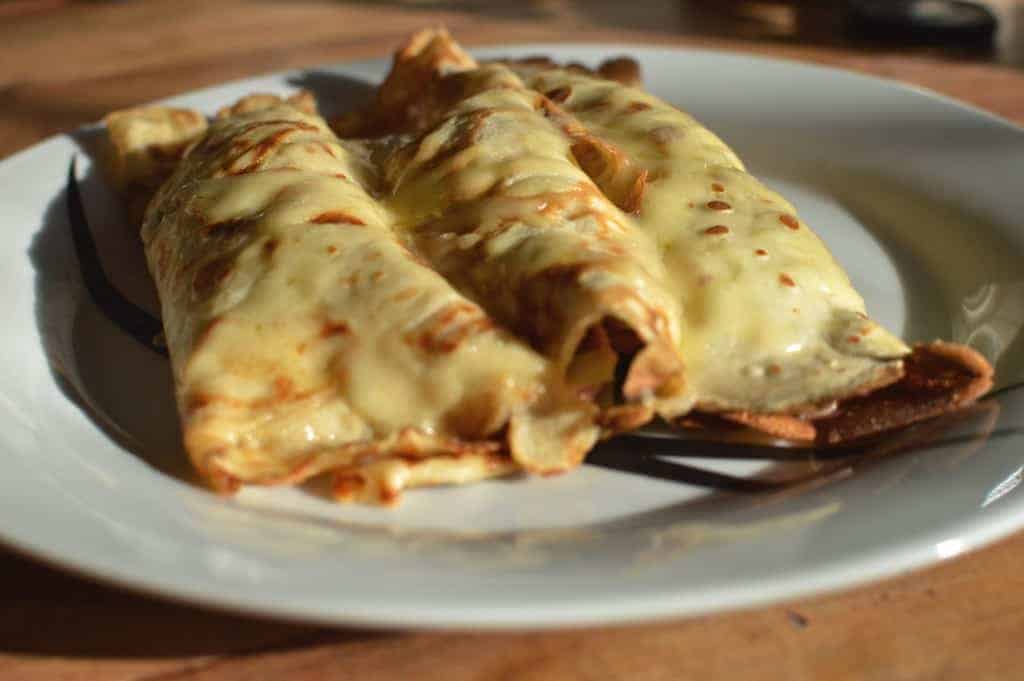 Crêpes are a hugely versatile dish, so whilst this recipe is savoury that mainly comes from the filling, meaning that this recipe is great for those just wanting a base on which to load Nutella or lemon and sugar.

Since I’m going for the savoury side though, I was in need of an interesting filling and who could argue with a leek, ham, spinach and cheese flavour combination? I ended up having the plateful in the photos for lunch the other day and although it was way more filling that it outwardly looks I just could not stop. If you have other bits and pieces on the side two crêpes per person is probably about right (especially if there’s sweet ones to follow). For an extra dimension, why not add some paprika or oregano to your crêpe batter? 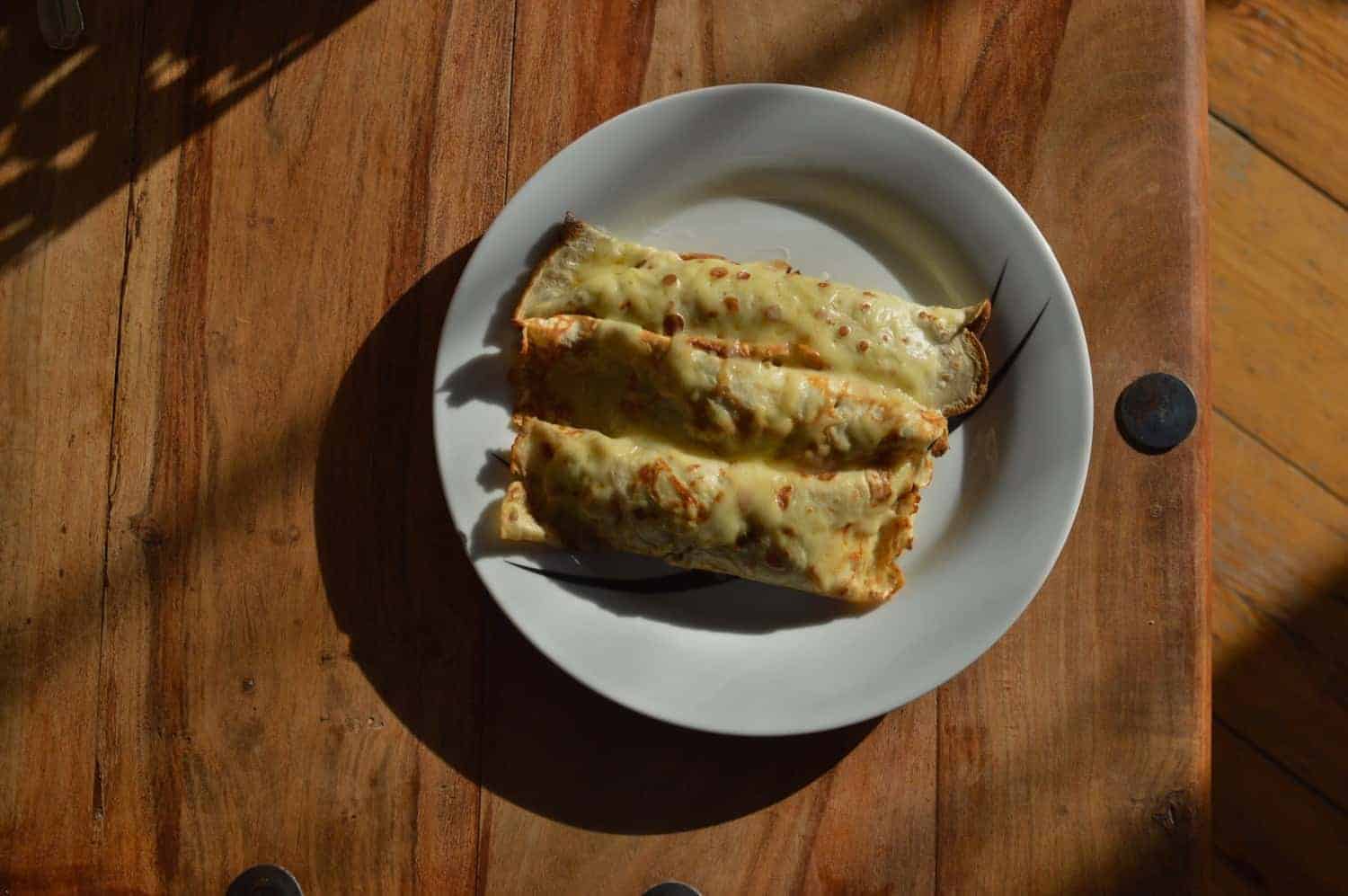 This recipe is an original to The Usual Saucepans, as it was made up after looking at a picture of a spinach-filled crêpe online. You can play around with any of the flavours involved or simply use the crêpe/pancake recipe on it’s own to make your own treats. You can use any cheese you like, but I opted for gruyère as it melts really well. It makes enough crêpes for about 4 people.

To start of with make the batter for your pancakes. To do this measure the flour and salt into a medium sized bowl, then pour in about a quarter of the milk. Using a whisk, combine the mixture until it forms a paste – you should whip out all the lumps, otherwise your pancakes will not cook evenly. Once smooth whisk in the eggs and then the rest of the milk. NOTE: if you want to make spiced or herb-y pancakes add in 1 tsp of your spice/herbs here.

Put a large flat frying pan on the hob on a medium heat and add your butter to it. When the butter melts swirl it around the bottom of the pan so that it’s entirely covered. Do each crêpe individually by pouring about 50 ml of batter into the pan (2 tbsp). Roll the pan slightly so the batter spreads across the bottom of the pan. Let it cook for about 20 seconds (it will vary hugely between the heat of the pan and thickness of the batter), until air bubbles appear all over the top and the edges brown, toss your crêpe to flip it over – or use a fish slice if you don’t feel brave – and then cook the other side for about 20 seconds. Remove from the pan and place on a flat dinner plate, gently folding it into quarters.

Repeat this process until all batter is used. As the pan gets hotter the process will get quicker and quicker. If your pan drys out (the cooked crêpes will start to stick) add a little more butter before the next crêpe.

Once you have all your crêpes ready do your filling. Thinly chop your leek – I quartered mine, then sliced across to give me quarter circles (no one wants a big chunk of leek in a crêpe) – and soften it in a pan with a bit of butter (the more health conscious can use an oil, but it is a day of excess after all). Grate all of your cheese and slice the ham. Wash the spinach gently.

When the leeks are soft, add in the spinach and let it wilt. When it’s halfway there chuck in the ham and two-thirds of the cheese. Ensure it’s all evenly distributed.

Once the filling is ready, take a crêpe and add a spoonful or two of filling, then roll like you would an enchilada. Place it in an oven proof dish then repeat the process, lining up the enchilada-style crêpes beside each other. When the dish is full/you’ve no more crêpes, cover the top with your remaining cheese and put under the grill for 6-8 minutes until warmed through. Serve immediately.