Dinner in a Hurry, Mains

Between going to London, it being sunny, lots of work and a little thing called Wimbledon, it’s been a while since I had a chance to make anything interesting (and had the time to blog about it). Actually, I’m going to place the blame squarely on the shoulders of the sun. And the amazing tennis. Between it all I’ve spent so little time in the flat that nothing has happened in the kitchen. I’ve even got my bike fixed and a new GPS cycling app for my phone (pathetic as it undoubtedly is, my inner scientist/geek loves a good stat – I’m not ashamed), so I’ve been taking advantage of the weather and tearing up Edinburgh’s roads, taking in the views and being far too healthy for my own good. 60 miles and counting in the last week, between that and Pimm’s picnics (it seemed the appropriate way to celebrate on Sunday) there hasn’t been a lot of the evenings left. It’s meant a lot of late dinners. 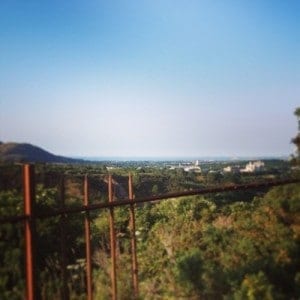 There’s something special about late dinners, especially when it’s warm out. The need for food that can be prepared quickly, but doesn’t compromise on flavour is a bit of a battle. Perhaps I should have invested in a copy of 15 Minute Meals, but in its absence I’ve discovered that I’m not bad at knocking things up in a hurry. Although given how hungry I am if I don’t eat until after 9pm, perhaps my taste buds are more forgiving. (I should probably point out that I usually have something like cereal before hitting the saddle, I would be grouchy and totally lose concentration if I didn’t – oddly enough I don’t fancy being splattered across the front of a taxi or head first in a bunch of nettles…).

Of all the speedy foods to cook – because let’s be honest, a salad simply won’t do – there is one that I adore. I’ve no idea quite why I love cous cous so much, but I’ve found myself using it a lot. It’s quick and easy (the way I like it currently) and lends itself well to summery dishes, packed with herbs and spices – my current favourite is livening it up with a bit of smoked paprika. 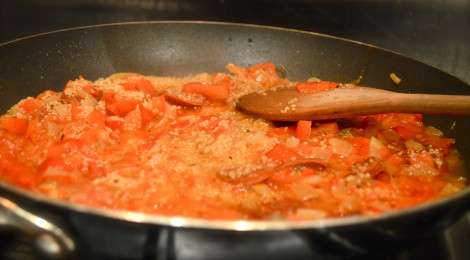 Last night’s late dinner was another outing for the cous cous jar, and my favourite to date. And for once something that was photogenic enough to find itself on the blog. I got home at quarter to nine (only a 12.6 mile cycle – but produced the view above, amongst others) and realised I had no idea what I was having for dinner. The fridge still yields a surprising array of options, but I settled on a ‘throw it all together and hope it works’ combination of onion, red pepper, chorizo, tomatoes and cous cous. Not only did it work, but it was incredibly tasty (again, hunger may be biasing this, but I still trust my taste buds on things like this). A bit spicy, packed with flavour and easy enough to pile on a plate – I think my final portion ended up almost double what’s in the photos…

Now that I’m getting in to these vaguely healthy habits, it’s something I’d like to keep up. I think there are probably a lot more ‘quick and easy’ late dinner recipes to come.

Do you have any favourites you think I should try? Leave a comment and let me know! 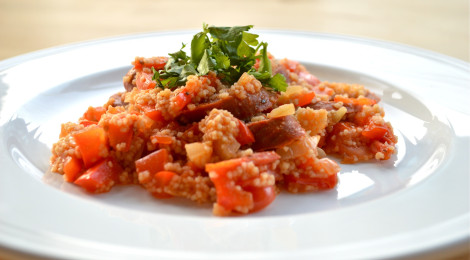 This is an original ‘throw it together and hope it works’ recipe from The Usual Saucepans, any similarities to other recipes in purely coincidental. It makes enough for two people – or one and a smallish lunch, if you’ve been cycling. 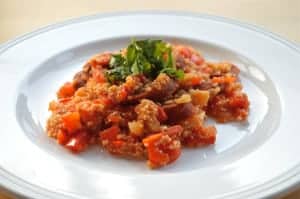 Chop your onion and garlic finely – speedy cooking is the name of the game – and slice the pepper into small chunks. Peel your chorizo and slice diagonally at about 5 mm intervals (it’ll leave big, thin slices to munch on).

Heat the oil in a large frying pan and soften the onions and garlic, making sure not to colour them. Once they begin to soften throw in the red pepper and mix using a wooden spoon. The smaller your chunks are, the quicker this will happen, so you can’t really put a time on it. Whilst the peppers are cooking, slice the cherry tomatoes into thirds (again for speed cooking), whilst keeping an eye on the peppers to make sure they don’t burn.

Put the tomatoes into the pan and allow them to cook for a 45 seconds or so – until they start to properly fall apart – then put in the chorizo. Allow it to cook for about a minute longer before adding in the cous cous and enough water to cover the lot. Once the water starts to boil, turn the hob off. Whilst the cous cous is cooking, season the dish with salt and pepper; add in the smoked paprika (depending on how much is in your chorizo and your tastes the amount you put in will vary – I like mine quite spicy, so added in about 1/2 a teaspoon). If the water is all absorbed before the cous cous is cooked, add a little more.

Spoon the cooked dish on to a plate and scatter the herbs on top (I used a mix of parsley, mint and chives, mainly because I had them in the fridge) for people to mix in at the table.

Tuck in and enjoy. 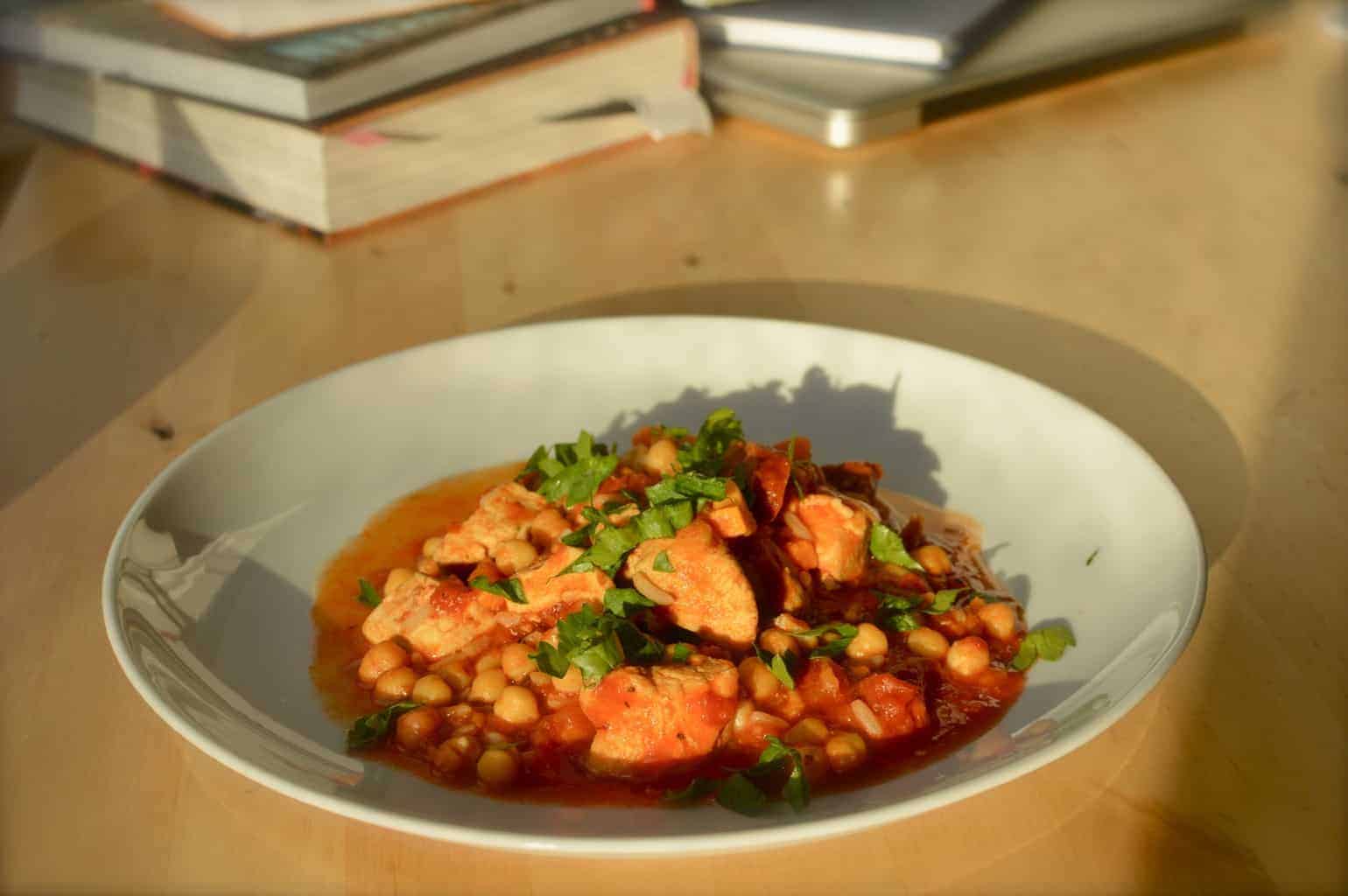 All recipes, Dinner in a Hurry, Mains
One for the (Leftover) Lovers 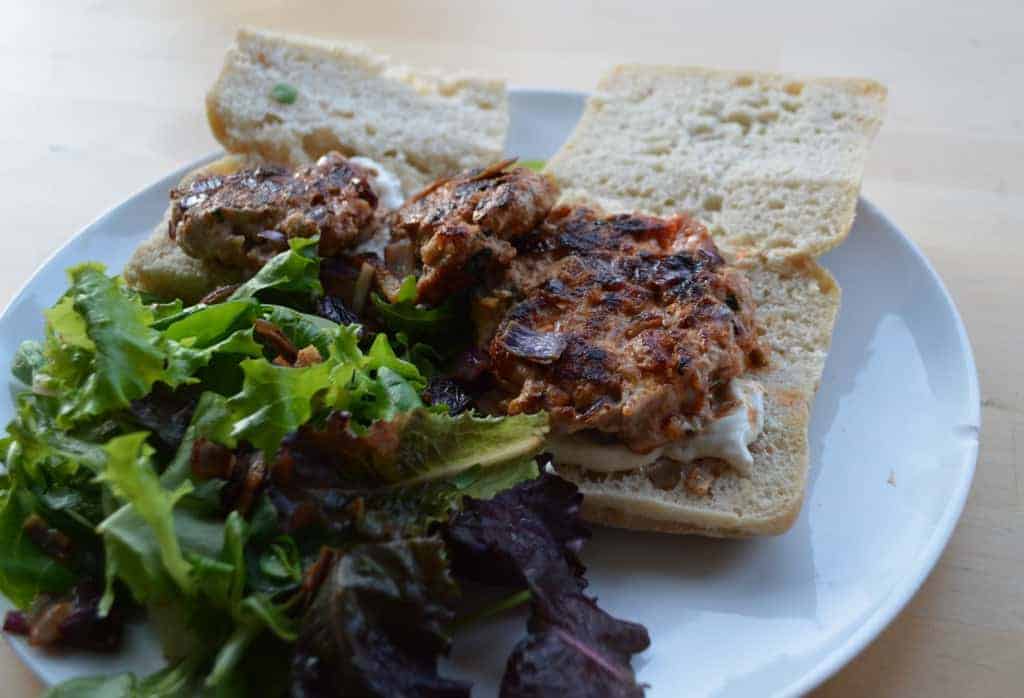 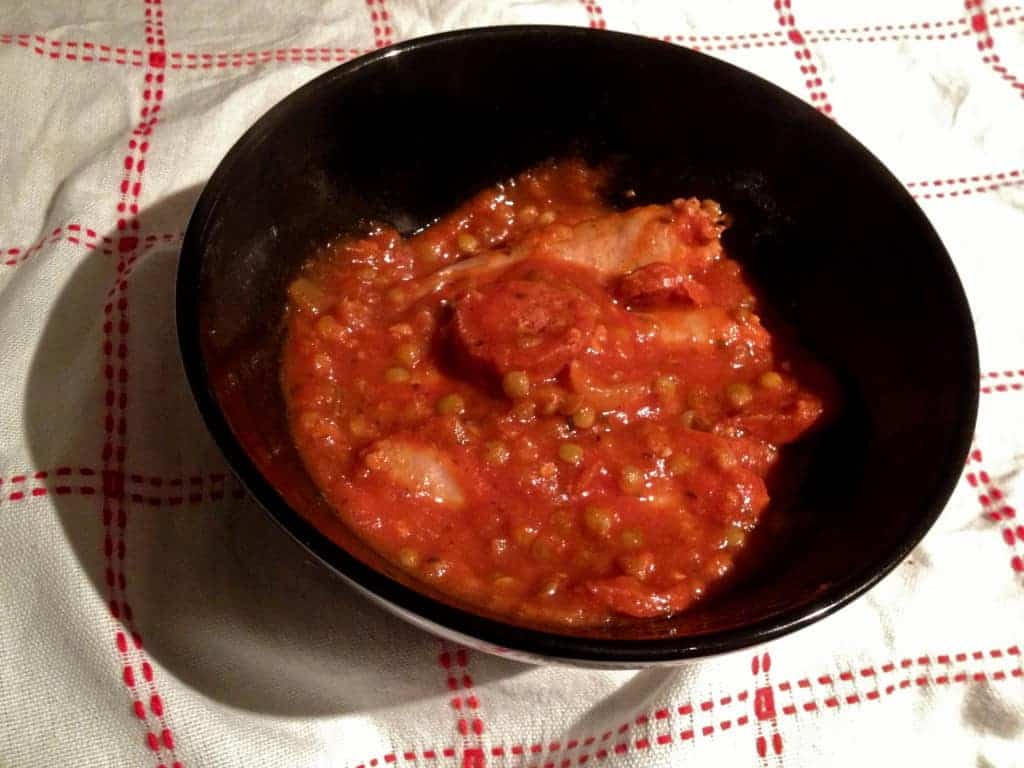 Mains
Grown Up Beans and Sausages