If you look through many of the food blogs out there in the bloggisphere you would find only flawless dishes, photographed exquisitely and rendered to perfection. This blog is not like that. Why? Well, firstly I’m not a professional photographer and my skills with a camera don’t suggest I might be, but probably more because I am human. I don’t have time to make something three times if the first two don’t turn out ‘quite right’; I also make mistakes and I’m not afraid to talk about them. In fact this is one of those times right now.

I was lying in the sofa in a slightly commatose fashion last Sunday, trying to motivate myself to get on with the day and not go back to bed, and settled on the alternative of an iced coffee and reading Saturday’s Guardian (the supplements, actually – couldn’t tell you the last time I read the main part of a paper [side note: I do read it online, I’m not completely ignoring any news]). Obviously I headed straight for the food pull out. 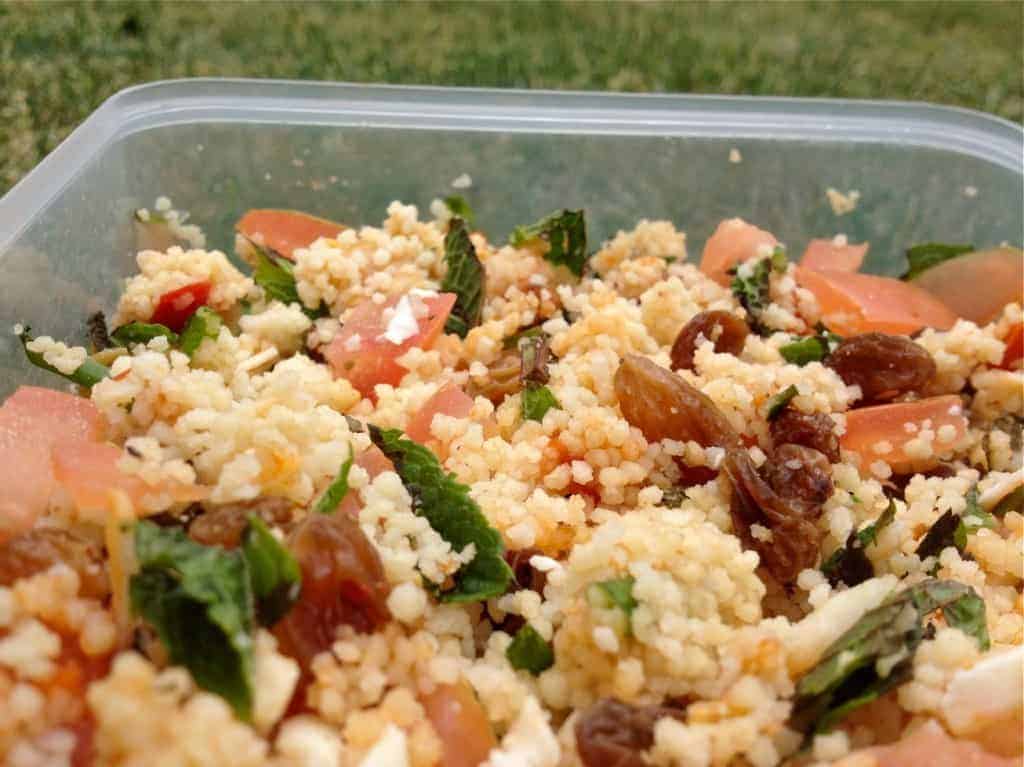 The Food pullout was all about herbs last week and herb recipes. Some of them sounded breathtakingly disgusting, to me at least, but there were others in there that I decided would be ones to try. I even had all the things in the house to make one of them – a mint and parsley tabbouleh – it was clearly going to be Monday’s lunch.

Fast forward through a day that is probably of little interst to you and I reach Sunday evening – tabbouleh making time. Obviously half past ten was of course the time when I realised that I did not in fact have everything (I was missing the red onion and the hot sauce the recipe suggested). It was also the point I looked at the recipe again and went ‘but I don’t like raw tomatoes. Why did I decide to make this?’

Sometimes my curiostiy got the better of me and I decided to plough on regardless of my ever-increasing list of failures. And from here it all went swimmingly: the couscous expanded, the herbs lent their flavour throughout the dish, I even remembered to take it out of the fridge at work well before eatning it so it was at room temperature. Then I got excited that I could take it to Princes Street Gardens to eat it, because it was such a nice day. So excited that I in fact forgot to take any photos of it.

Yup, you read that correctly. I compounded failure with idiocy for an all round fail-fest.

Sadly it doesn’t end there though. I decided to make it again for Wednesday, so I would be able to blog about it. So it got to about 10:15 on Tuesday night and I went to make tabbouleh two. Guess what – I still didn’t have the red onion. Nor the hot sauce. And I now didn’t have any cucumber because I’d used it all on tabbouleh one. As though I could have been any stupider.

When you are an idiot there is only one thing to do: smile and think of an alternative. In this case I upped the raisins, lime juice and mint (because those three combined clearly substitue for cucumber…) and threw in a couple of teaspoons of spicy tomato chutney I had in the fridge. And if you were wondering, it was every bit as good as Monday’s lunch – even with the dreaded raw tomato – made even better for getting to eat it whilst gazing up at Edinburgh Castle wondering how many people get quite as good a view to accompany lunch. One day I might even make the proper one and let you know how they all compare.

You may – rightly – be wondering why I’m even bothering to share this, but the reason is, quite simply, this: I find it really amusing. The sheer level of my own stupidity greatly entertains me. Nobody’s perfect – no matter what their blog might suggest – but I think I take the proverbial biscuit this week. Actually, I forgot to buy biscuits too. Oh dear. 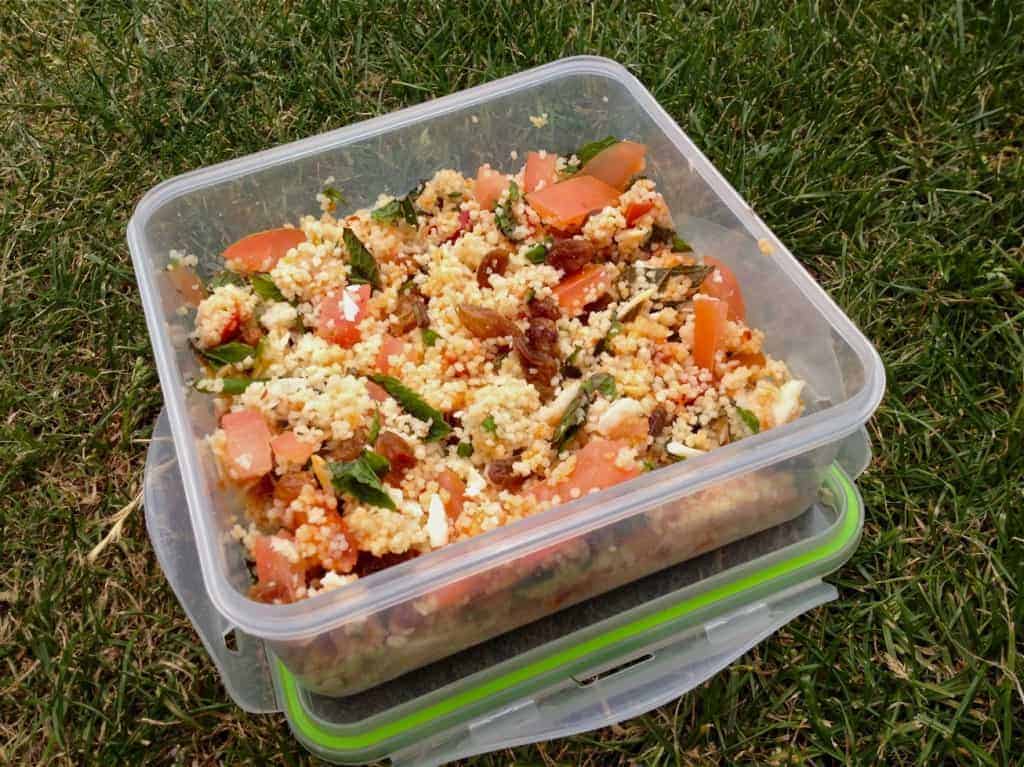 Craig’s Tabbouleh That’s Not a Tabbouleh

This recipe was adapted from the Food section of last Saturday’s (13th July 2013) Guardian Food supplement. Most of the changes were made because I didn’t actually have several of the ingredients. The version photographed is as below, but minus the cucumber, with 2 tsp spicy tomato chutney and 20% more mint, lime juice and sultanas. I also added a sprinkling of left over parmesan – because I could hardly get much further from the original recipe anyway. You can’t really go wrong with this – so feel free to make it up as you go along too. Serves 1 for lunch.

Chop the tomato into little chunks (mine were about 5-10 mm squares), slice the cucumber into batons about 2cm in length and finely chop the parsley, mint and chives. Dump it all in the tupperware box that you’re taking to work (or a bowl, if you’re going to be at home) and add to it the couscous, lime juice and sultanas.

Mix everything together and then season with some salt and pepper. Mix again. Put in the fridge for at least four hours (but better over night) to let everything combine.

Take out of the fridge at least half an hour before eating. 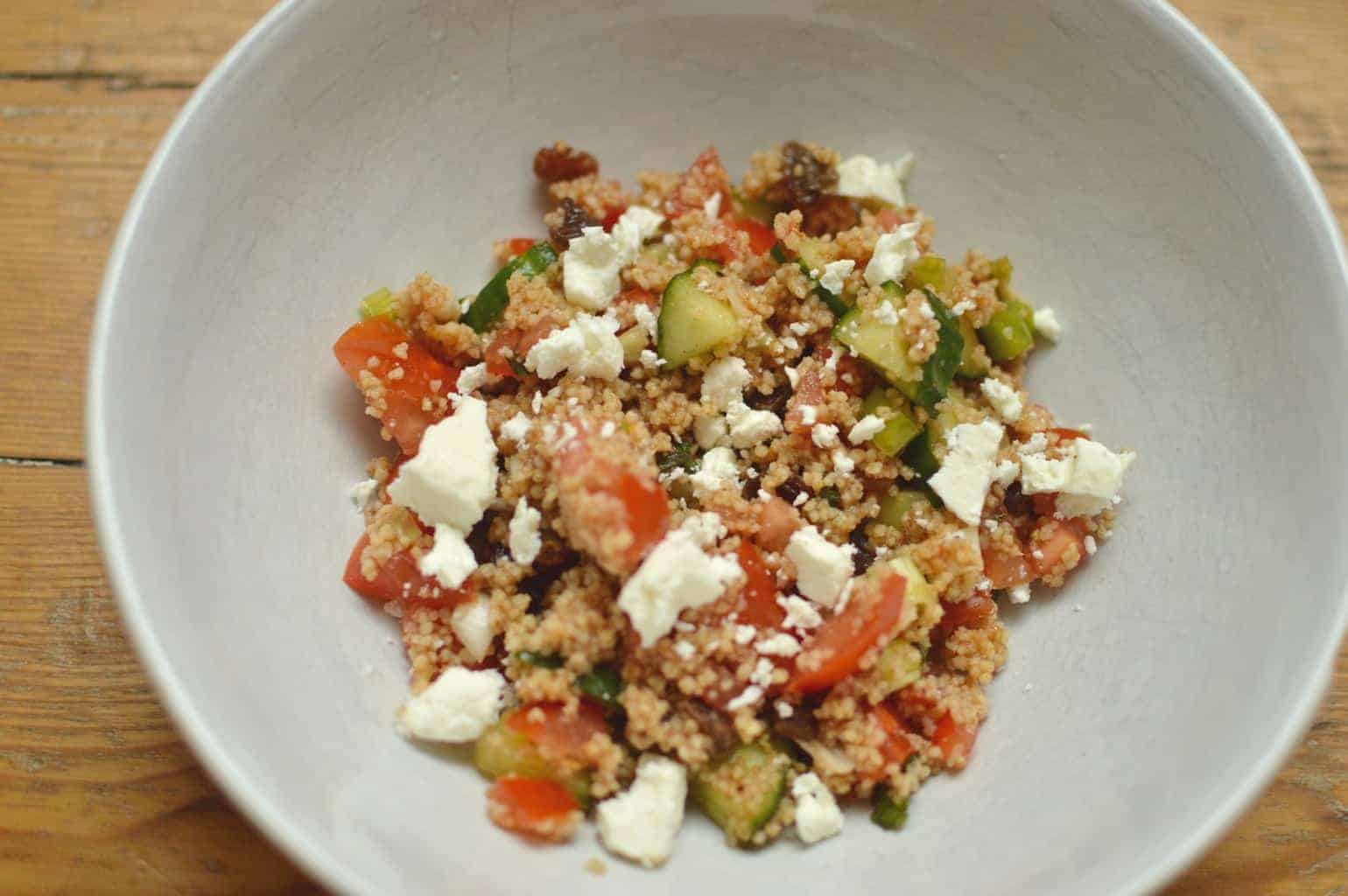 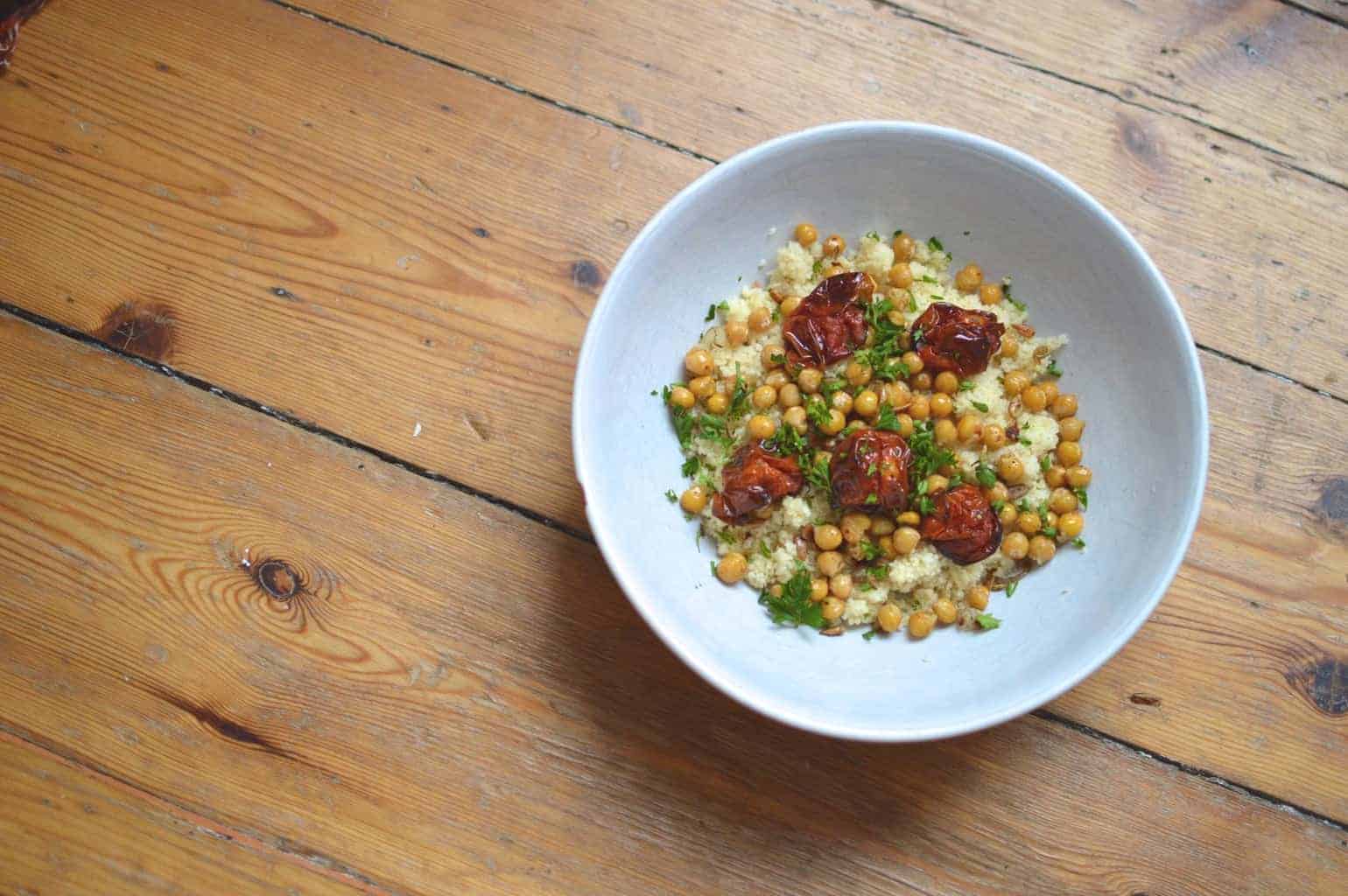