There are moments in the kitchen where – between you and me – only the phrase ‘must do better’ really applies. Those are the ones that we pretend didn’t really happen, the ones that we never quite get around to writing about. I had one such moment at the weekend. Except I’m going to tell you about it.

The title of this post – Accidental Raspberry Eton Mess – may well have already set your mind racing, as it’s not very often an accident occurs and the result is, basically, an Eton Mess with the wrong fruit in it. I’ll be honest, the whole thing started out as a pavlova.

I’ve been itching to give Pavlova a try for quite some time now, but it really has to be quite nice weather before it doesn’t seem anything apart from a ridiculous dessert to make. So with this weekend’s sudden burst of sunshine I decided to get cracking. It all started out quite well on Sunday morning – well, if you ignore the fact that the previous night’s birthday party (not mine, got over that one) had rendered me virtually voice-less and pretty exhausted – I got a couple of recipes for meringue (I can never quite remember the proportions), had all the ingredients – the raspberries were frozen, since they are distinctly not in season; their inclusion will make more sense in a minute – and the kitchen to myself for a few hours. It was all going so well. I went out for a wander whilst it was cooling in the oven and everything was looking distinctly rosy (and that was before a raspberry had even been defrosted). And then it sunk.

Yup, whilst I was out my meringue went from being thick and strong to something resembling an empty pillowcase. Like this. 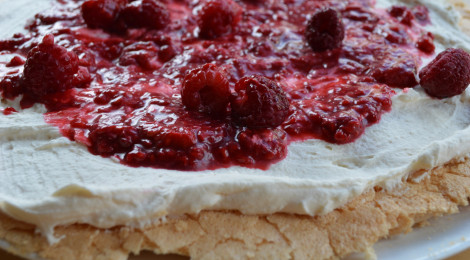 OK, that’s a bit far – it only sank a little bit – but let’s just say that it wasn’t really going to be an impressive pavlova by any stretch of the imagination.

This was a bit of a pain, because it was due to be my entry for this month’s Baking with Spirit (hosted by the wonderful Janine over at Cake of the Week), the theme of which is raspberry liqueur. Necessity being the mother of invention and all that jazz I got my thinking cap on to ponder what to do about the whole mess. Yup, I used the word mess and after about five minutes realised that I’d said the solution already. A raspberry Eton Mess it was.

Attempt two at dessert was then born, so I will be able to enter it after all. Although I should probably confess here that I’ve twisted the rules slightly, because I didn’t have any raspberry liqueur. I toyed with entering a sober version of the dessert for the challenge, but since that isn’t particularly in the spirit of the challenge (yes, I’m as painfully aware of that pun as you are) I got a bowl, spoon, some raspberries and a bottle of gin and set about making a very quick raspberry gin to drizzle over it. It’s not quite a liqueur, but it still counts, right?

I really didn’t think that making a pavlova would be so stressful, nor did I expect it to end up becoming an imitation Eton Mess; however, it did and so (true to form) I decided the best way to get over the whole situation was to take the photos very quickly and then retreat to the sofa with the bowl and a spoon. 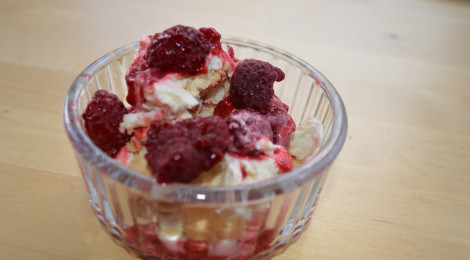 Since this originally started out as a pavlova, I will give you the pavlova recipe. It can, if it doesn’t work out so well, be repurposed into the mess. It makes a pavlova for five to six people. The recipe came from the BBC.

Line a baking sheet with grease-proof paper and pre-heat the oven to 140ºC.

Whisk the egg whites until they are foamy and soft peaks form. At this point add the caster sugar spoonful at a time, ensuring it is fully whisked in. Then whisk in the vanilla, cornflour and white wine vinegar.

Spoon the stiff mixture on to the baking sheet (you can draw a circle on the underside, if you want, or just do it by sight as I did) and make sure it is of equal thickness at all points. Bake in the centre of the oven for an hour – it should be firm, but not coloured. Remember, don’t open the oven, the temperature must really be constant.

Once cooked, turn the oven off and leave it to cool IN the oven. It’s delicate, so sudden changes in temperature (like going from a hot oven to a, relatively, cold kitchen) is going to make it implode!

Once it’s cooled whisk the cream and icing sugar together until they form fairly firm peaks. In a separate bowl crush up some of the raspberries and a little icing sugar, then mix the gin into it and set aside.

If – at this juncture – you are still making a pavlova, spread the cream thickly over the top of the meringue, and decorate with whole raspberries and the raspberry gin. If you’re making Raspberry Eton Mess, crush up your meringue into a variety of large and small chunks. In a glass/bowl mix these with the cream and whole raspberries to form the traditional Eton Mess look. Scatter a couple of whole raspberries on the top and then drizzle over the gin.

However yours ends up, remember that it’s the taste that counts! 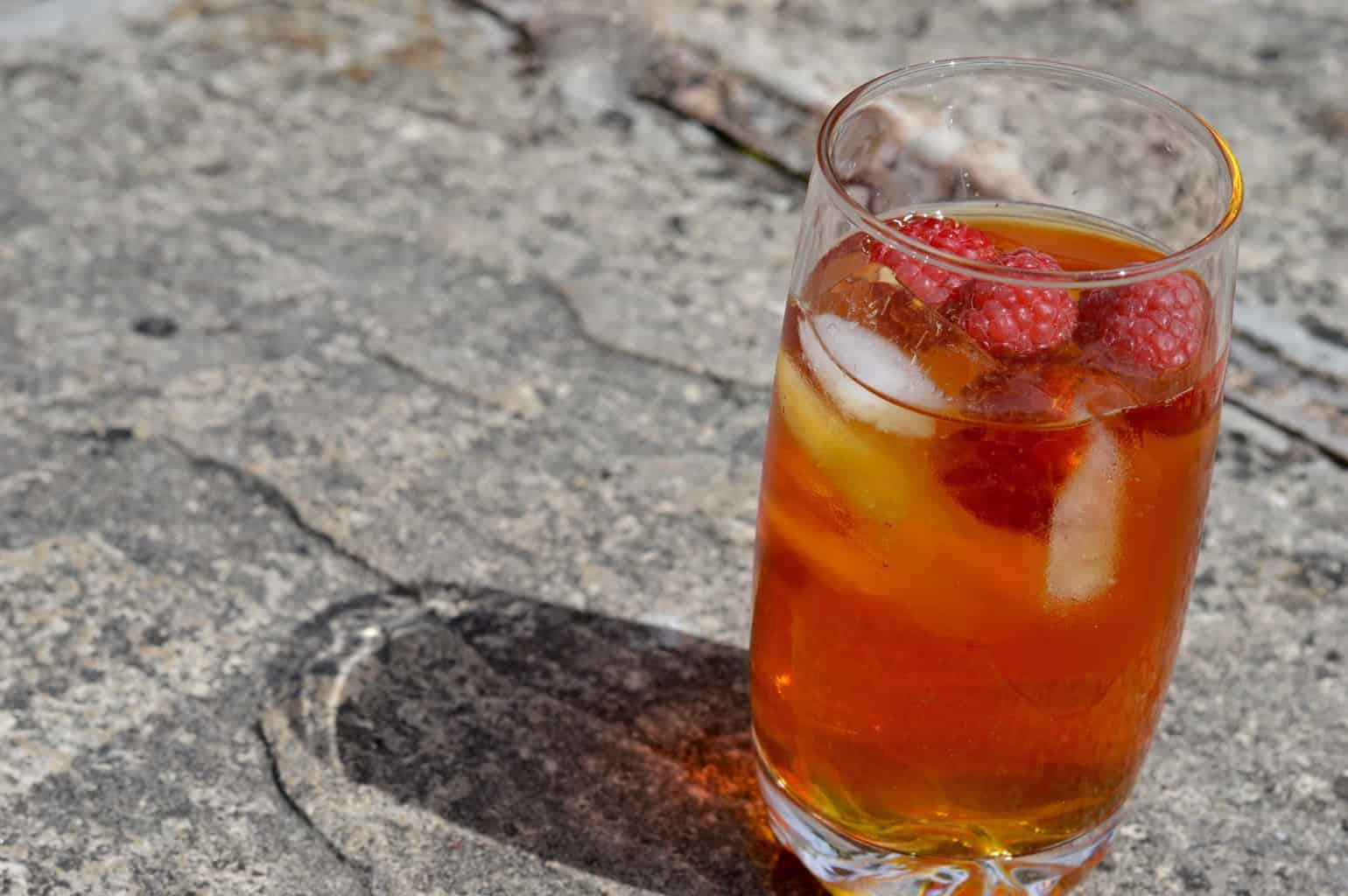 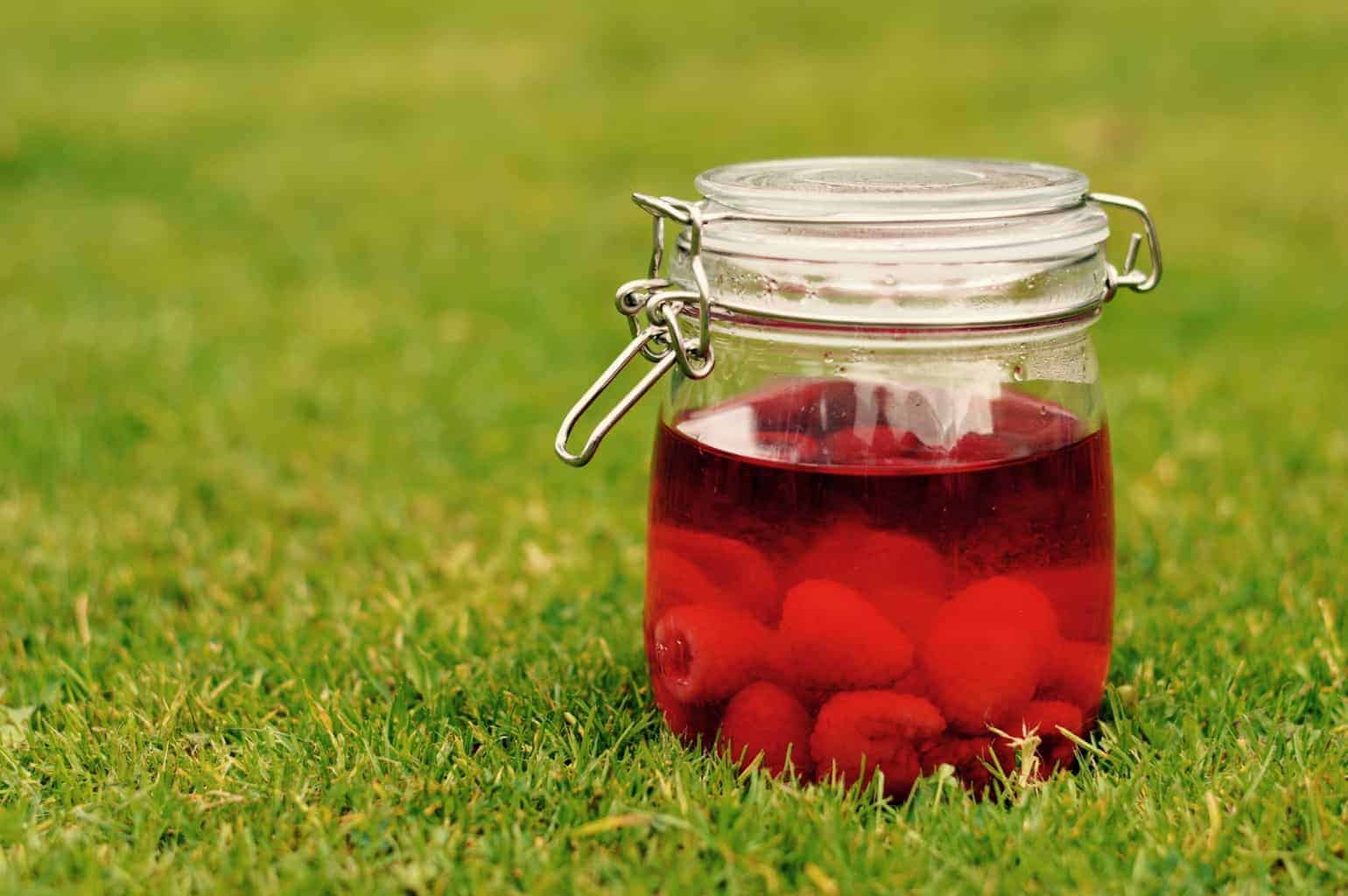