Spinach is – bizarrely – one of those vegetables that seems to provoke quite a strong reaction. People tend to really like it or despise the stuff. It’s rare to meet someone with no particular feelings towards it. So it’s a bit of a risk then to present anything spinachy to a crowd, especially when it’s part of something a little out of the ordinary. To me though, this just makes it more of a challenge (and thus irresistible, no matter how inadvisable).

Regular readers of The Usual Saucepans will probably know that my work loves food and are regularly guinea pigs to some of my culinary whims, and this is again where we find ourselves – at our monthly office potluck lunch with a tin full of spinach English muffins. Yup, spinach in a savoury muffin.
It’s a recipe I’ve tried before – back in early August last year – but was pretty unsuccessful. Then I’d done something to my pan (I think it was just too hot) and everything just seemed to burn; this time I was armed with a little more knowledge and experience with the beast that is yeast. Also, this time failure wasn’t an option, it would mean bringing shop-bought to the office table – not an issue ordinarily, but an admission of failure since I’d already said I was making something.
OK, I’m maybe embellishing the tension and drama beyond its true state, but it did feel close to it – it felt almost a step too far.
To put a bit of a reality check into the narrative I should say that despite having to explain the concept a couple of times to bemused-looking colleagues (and a chorus of “of course you have”, when I said “I’ve brought spinach English muffins) the final product turned out pretty well and was met with general nodding and mouth-full-sounds of approval. It might have been a bit of a risk, but one that (this time) was pulled off. 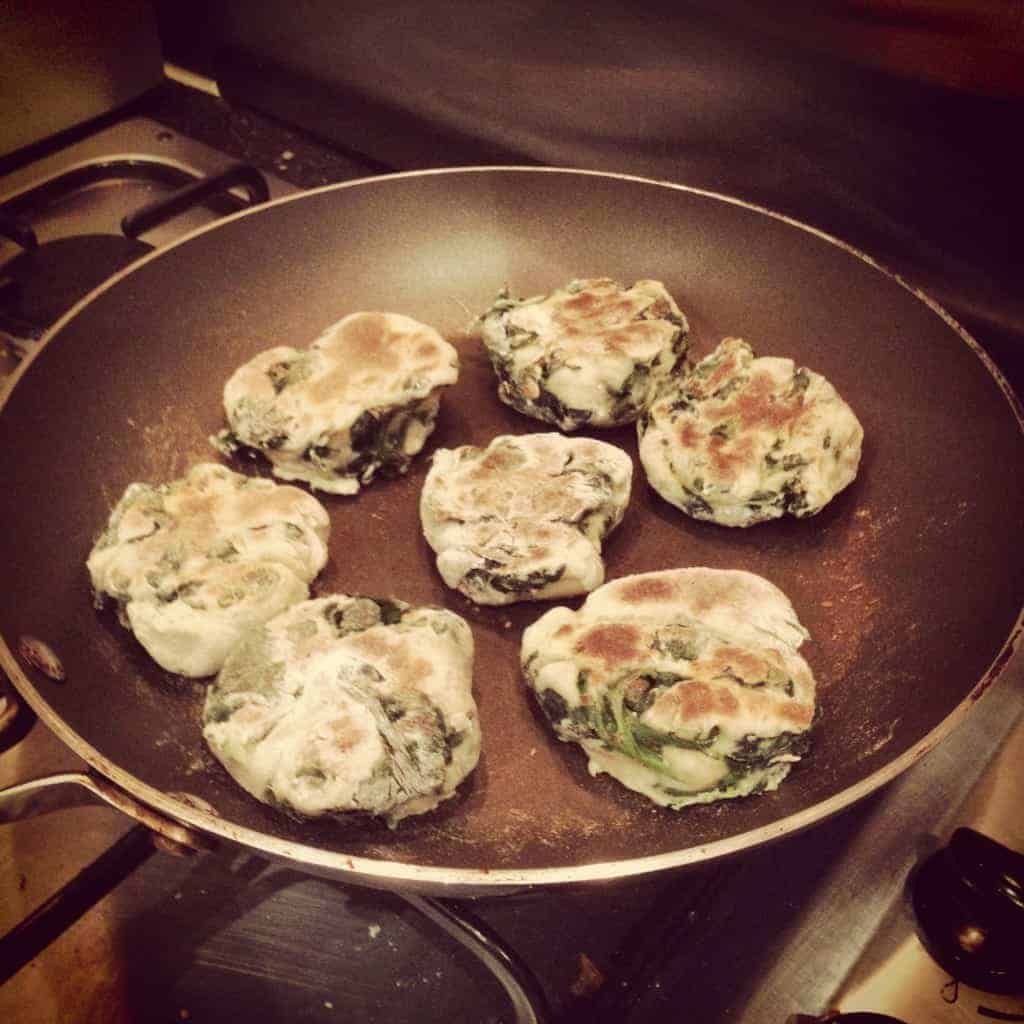 This recipe is adapted from one in The Fabulous Baker Brothers’ first book, but now appears in a slightly different form here. I realised whilst making these that I don’t actually have a circular cutter, so can say from experience that a wine glass does the same job pretty well. The recipe will make approximately 12.

Put the butter and sugar in a pan, then melt them. Once melted, add in the milk, nutmeg and yeast and heat until the mixture is tepid. Do this gently and don’t let it get hotter than about 40ºC or you’ll kill off the yeast. Add in the spinach and allow it to wilt a little.

Weigh your flour into a large bowl, then add in the salt and the milk mixture. Get your hands into the bowl and work the ingredients into a wet dough, when it comes together turn out onto a floured work surface and knead it for about 15 minutes, until it becomes smooth. Put it back into the bowl, cover with cling film (a shower cap it actually perfect for this) and leave for about 45 minutes to rise.

Once it’s risen, start warming a heavy-based saucepan on the hob. Cover your work surface in flour again (or semolina) and tip the sticky dough out on to it. Gently stretch the dough out – trying to keep an even thickness across it – until it is about 2 centimetres thick. Take your cutter (about 7-8 cm, or a wineglass) and cut the dough into disks. Place the discs into the pan and fry them for about 5 minutes, then flip them over to cook on the other side – keep an eye on them so they don’t burn.

Allow to cool a little before tearing gently in half and lavishing with butter.