Chocolate, porter and Oreo cake – because who doesn’t love cake?

Cake is one of those fantastic things in life that you can make with relatively few ingredients and near infinite flavour possibilities. Also, I happen to love cake. Who doesn’t love cake? Today though we’re going slightly more complicated with a chocolate porter cake. Yup, beer, chocolate and cake all in the one spot. Bliss.

I was recently perusing the blogosphere during a mid-afternoon break [TO MY BOSS: obviously I work really hard at every moment I am in the office] and came across an absolutely divine looking recipe from Joy the Baker who had taken advantage of strawberries coming into season (side note: I am very excited for that to happen here) to make her creation. Crucially it was covered in crushed up Oreos, and even more essential to this story, I was looking for a cake to bake to take to my friends who I was visiting up north (not ‘the north’, the one that’s further, erm… north) – the friends who I also made Early Grey and Mango gin for. I had hesitated on what cake to make because we were going to be travelling there by train, but with an impending rail strike and us driving, I was more confident making something that might just fall to pieces.

For a while I’ve had my eye on using beer more in baking – we went to a beer-baked afternoon tea with Edinburgh based brewers Innis and Gunn at the end of last year, which opened my eyes to the potential of baking with beer (read all about it on Edinburgh Editor, my other blog) – and this seemed the perfect opportunity for it to happen. Since it now kind of had to involve crushed Oreos I decided that a chocolate sponge with beer through it would be delicious. And then made a last minute decision to add salted caramel into the butter icing. Because who wouldn’t make that sort of addition?

And to make it even more relevant, I picked a beer from the Black Isle Brewing Company – their Porter, to be precise – as we’d be passing their brewery, just north of Inverness, on the way. 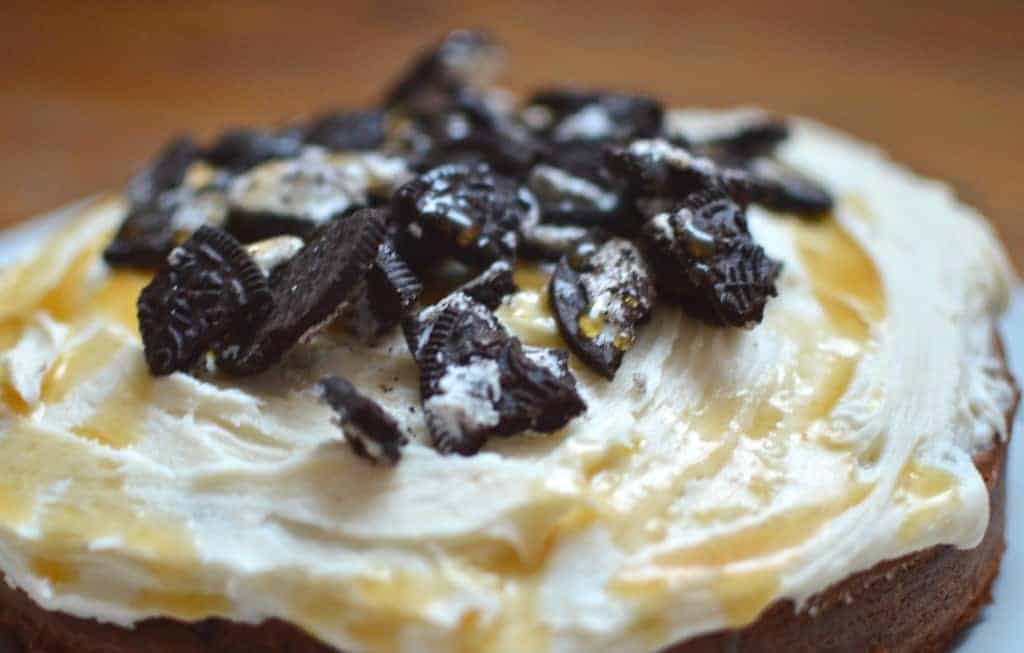 Since beer is quite liquid-like (you know, being a beer and all) I went for the syrup option. In other words, removing most of the water content from the beer, thus not making a disgusting slushy by accident. This also has the added benefit of removing the bitter alcohol taste of the beer as you boil it down. The end result was possibly a little more evaporated than I intended (and tasted exactly how you’d imagine 300ml of porter boiled down to about 40ml to taste, and then a little more intense).

Having planned for the cake to be wedged carefully in the boot the rail strike was obviously cancelled. So the tin had to travel 200 miles by train, bouncing about in the overhead luggage rack. Somewhat surprisingly it got there in one piece.

Beer, chocolate, Oreos and salted caramel may sound a bit much for a cake, but it works very well – neither the beer nor the chocolate are too strong to overpower the rest. It may not be something you make every day, but it does have the wow factor that you just sometimes need in a cake. Also, it’s cake, and I ask again: who doesn’t love cake? 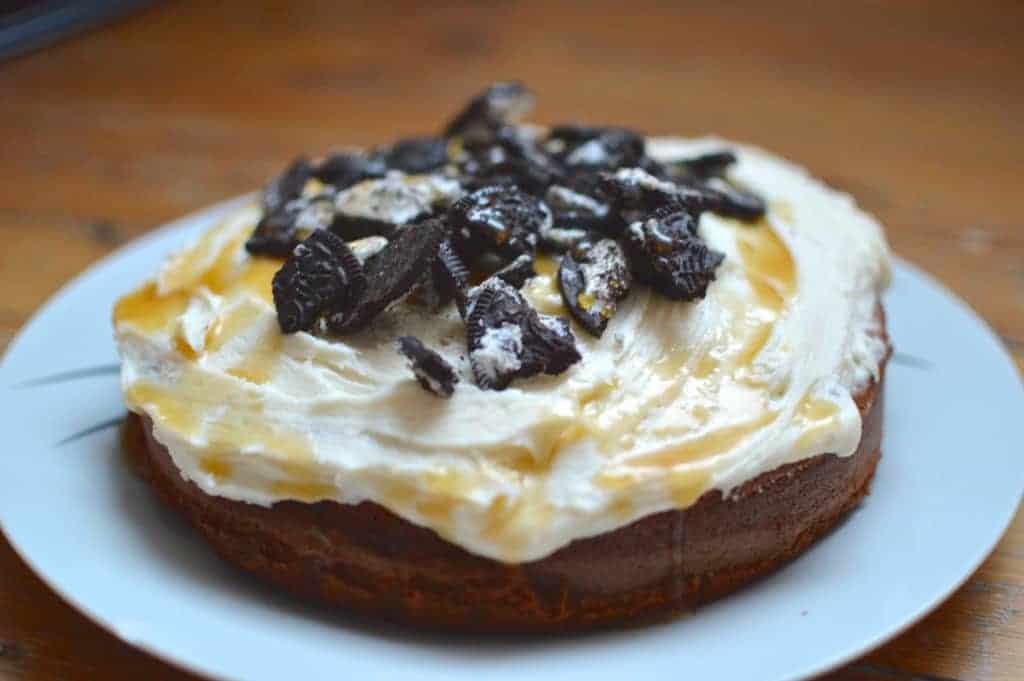 Unsurprisingly, given the slight myriad of ingredients, this cake isn’t based on a recipe – it was inspired by an Oreo-topped delight on Joy the Baker’s blog, but the recipe is an original to The Usual Saucepans. It makes a 20cm (8inch) cake, which is enough to serve about a dozen people (if you want to share that is). Oh, and it involves alcohol, so reduce it down responsibly and don’t stand over it whilst it bubbles away – you’ll be singing off the fumes…

Start by reducing your porter (I actually did mine the night before so it was properly cold, but you could do it and put it in the fridge for an hour or so). Put it in a pan – a much larger one than it needs, it will bubble – and put it on to a high heat to bring to the boil. Turn the heat down to medium and let it simmer gently until it is about a quarter of its original volume. Allow to cool fully.

Preheat the oven to 150ºC and line a 20cm (8 inch) loose-bottomed or springform cake tin.

Take a large bowl and measure in your butter (it’s best at room temperature) and the sugar. Take a wooden spoon and beat together until it is smooth and golden in colour. After this is done add in the flour, ground almonds and cocoa powder. Combine gently and then make a well in the centre. Beat your eggs in a separate bowl/jug, then mix in your porter. Pour into your well and gently combine everything. Mix thoroughly for a few minutes so lots of air gets into the mixture – it should feel light and creamy. If it is more liquid than cake batter your beer wasn’t reduced enough – add in an extra spoonful of flour.

Using a spatula, move the batter into your pre-lined cake tin and put it in the centre of the oven. It will take about 40-50 minutes to cook. It should be springy on top and a skewer will come out cleanly from the middle.

Remove from the oven and allow to cool.

Whilst the cake’s cooling make the caramel and icing. For the caramel, put the caster sugar in a pan and, over a medium heat, stir continuously until half of it has melted and is starting to turn golden then take off the heat (if it looks like it might burn, remove from the heat a little earlier). Stand a little back and pour in the water and salt – it will spit and hiss. Continue stirring, as it will likely crystalise. Return to a slightly lower heat and stir until it fully melts. Set to one side an allow to cool and thicken.

Put your icing sugar, vanilla and butter into a bowl and mix together, adding in a few tablespoons of water if it doesn’t fully come together. It should form soft peaks, much like whisking cream. Add a couple of teaspoons of your caramel in to make it even tastier. Put your Oreos in a bowl and use the end of a rolling pin/base of a wine bottle to break them into small pieces.

When the cake has cooled, slather the top of it in the butter icing, using a palette knife (or similar) – it doesn’t have to be perfect or cover the edges. Take a handful of your broken Oreos and pile in the centre, press them in a little, then scatter more over the top until you are satisfied there are enough. Take a spoon and drizzle your caramel over the cake from a height to round it off.

Take a big knife and cut yourself a huge slice, because you deserve it.