The Philadelphia Story (Part I)

This is the second post about my recent trip where I spent a fornight stuffing my face in a variety of places on the East Coast of the USA. You can find the New York post here. I’ve written quite a lot about Philadelphia, so it’ll be a two-parter, the concluding part about Washington DC will be here soon.

Stop number three on my mini US tour (two was rural New Jersey for a wedding, so this is post two – you haven’t missed one) was an exciting one. The one destination of four I hadn’t visited previously: Philadelphia. The City of Brotherly Love. 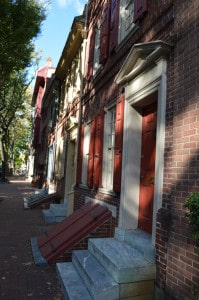 Every time I talk to someone I know on the East Coast of the US (and many others besides) one of the places that people talk about with a true passion is Philly. It was potentially on the cards for my trip Stateside a few years ago, but was shelved at the last minute. Since then I’ve heard even more tales of how wonderful it is, so this time round there was no way I was missing out. Oh, and one of my friends told me it was “One of the best cities in the US for food.” Did I mention that I’m slightly obsessed.

A city with a long (in US terms), rich and diverse history, portrayed in the architectural style of much of the city; but where many historic cities fail, Philly comes out on top because it has learnt how to integrate its prestigious history with a thriving, vibrant modern culture. If it’s not already quite apparent – and if not, rest assured it soon will be – I really, really liked Philadelphia. It has a combination of all-American charm, mixed with a laid back attitude which doesn’t take itself too seriously, and a real sense of fun. For clarity this would be a good time to point out that I was there with two friends, so any mention of ‘we’ is not one using the word in the royal sense.

In terms of food, I think we have to dive straight in to the big one. The Philly Cheese Steak. For those of you who haven’t heard of this it is, in essence, a shredded steak sandwich in a hoagie (an Italian baguette-esque roll), topped with onions and ‘cheese’. I use the inverted commas around the cheese for reasons which will soon become apparent. It is somewhat of a local obsession – everyone seems to be vying for the title of ‘Philly’s best cheese steak‘. I went to Jim’s Steaks on South Street [side note: Philly shares a lot of street names with St Andrews, perhaps that’s what appeals to me], because I was informed by where I was staying that it was “By far the best place for steaks [the name said ‘snacks’ are commonly known as] in town”.

Well, they say that you can tell how good a place is by the queue outside and this place certainly had a queue – and it was four in the afternoon! I can be a rather impatient person when it comes to waiting for food, and nearly every part of me was bored rigid by the time I was nearing the middle of the ever-snaking queue, but I persevered to be confronted by three choices for my ‘cheese’: ‘American’, ‘Whizz’ or ‘Provolone’. My brain was a bit in flux and just wanted to say “NO! I want proper cheese!“, but I managed to resist and talk almost normally. The first, you might rightly guess, is the plastic crap served on burgers in places you can only stomach drunk/very hungover; the middle one is an abomination that looks like cheap mustard from a squeezy bottle – except this comes in a large tin and is spread with a palette knife; option 3 is something that sounds pharmaceutical but is in most places Italian (although I doubt this one had ever even met an Italian). Basically the three options made me very glad I live in a country where I have ready access to a fantastic range of delicious cheeses, and also that the EU has (I would hazard a guess) laws against most of the ingredients in the first two options. I opted the Provalone – it seemed the lesser of three evils – and I’m pleased to say that my ‘sandwich’ was worth the wait. It’s not exactly the dizzy heights of culinary sophistication, but as ‘fast’ food goes, this is absolutely delicious (I may have been half way through before remembering to take a photo). I have plans for making a version of this with better quality ingredients, and it is a day I am very much looking forward to. 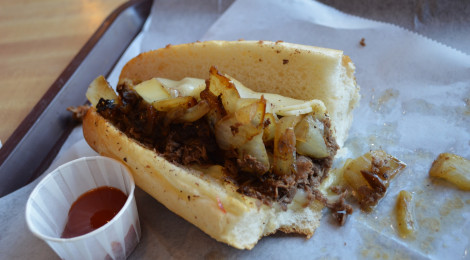 Another thing I saw a horrible trend for – in every part of the US I was in (save the middle of nowhere) – was the conitnuing fad for eating things on sticks. Seriously people, ‘cake pops’, ‘macaron pops’ and even ‘pie pops’ just need to stop. NOW. Rant over. On to Chinese food.

Chinatown is really weird in Philly. Sure they often don’t outwardly inspire – we’re back on the trail of food here, by the way – but here I was genuinely concerned for what would be on my plate. After a fairly brief sojourn around its six blocks dinner was sought elsewhere. ‘Beef/Seafood’ really isn’t the best heading for a column of a menu. The early part of the week is quite quiet in the City of Brotherly Love, but we found somewhere that looked intriguing – a Cuban restaurant. Apart from a lack of beer (it turns out that our driving licences weren’t sufficient ID – despite being suitable everywhere else – and we only had one passport between three) dinner was an interesting blend of mango, chicken, sweet sauces and banana fritters. It was, on the whole, pretty different to most things I usually eat (and dare I say a little too sweet for my liking), but I really enjoyed it and I’m on the lookout for something I can cook at home – anyone know of any good Cuban cooking blogs? Oh, one thing I won’t be trying again in a hurry though is mango butter. Presented like an Italian bistro might with garlic butter, to go with bread, there is something indescribable about it. An indescribable thing that just does not work. Don’t let me put you off trying it, but afterwards I’ll try resist the words ‘I told you so’. 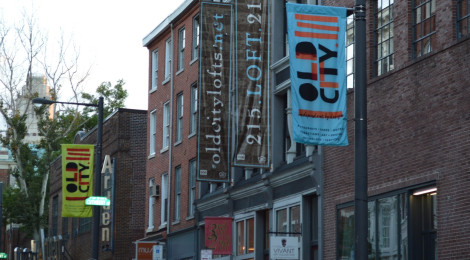 Because I like to talk, my Philadelphia story is far too long to be one blog post. Part II of The Philadelphia Story will be out tomorrow.