I’ve landed in Kuala Lumpur. It’s early evening, the sun’s just setting and it’s 31 degrees. It takes me less than an evening to realise why people fall in love with South East Asia.

Endless sunshine, temperatures that don’t seem to change all day, life flowing by at a more leisurely pace (and I’m in the centre of a city). It feels like responsibility and anything that needs doing in life can wait.

Running right through the city centre, it is from the Klang river that Kuala Lumpur takes its romantic sounding name. Although such illusions are flushed rapidly downstream when you get the not so romantic translation – ‘muddy confluence’. It may be an accurate description, but alas I think it’s one of those bits of knowledge that it’s better to gloss over. 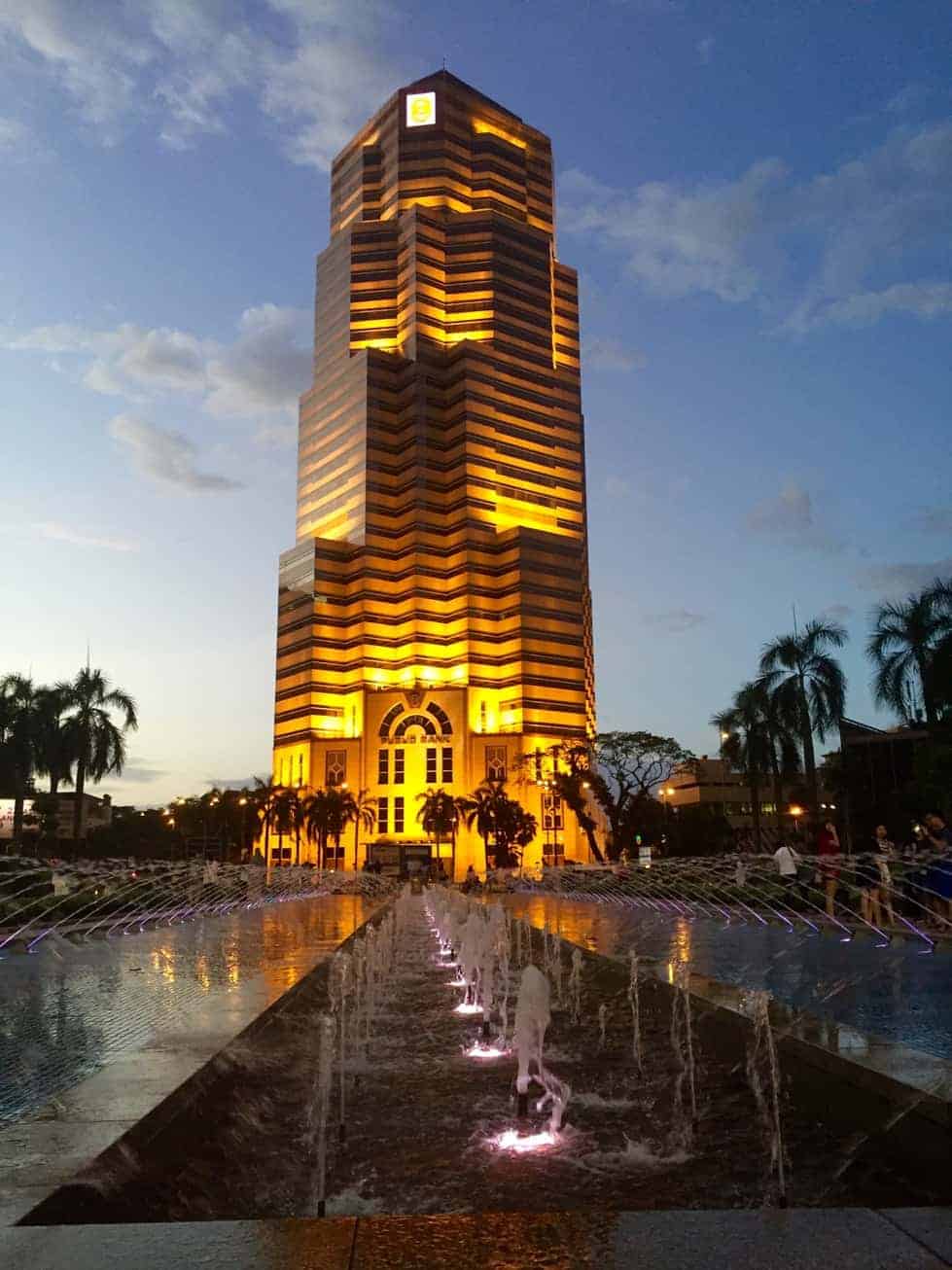 As the capital of Malaysia, Kuala Lumpur has long been a hive of life, but Malaysia’s geographical location has given it an importance over the years as both a meeting point and colonial outpost (much as it may seem that I am doing a tour of ex colonial outposts, I’m really not, honest). Aside from the native Malay people, the two other largest ethnic groups are Chinese and Indian – the three cultures coming together to form a complete cacophony of sounds, smells, colours and flavours.

Although officially a Muslim country, Kuala Lumpur is – at least on the surface – quite relaxed about it (or perhaps that’s just because I was in Abu Dhabi not less than a month ago). Sure you sometimes hear the Imam’s call to prayer, and many of the newer government buildings have islamic themes in their design, but it is such a mixed city that no one religion seems overpowers it. Curiously on that design point, did you know that KL’s famous Petronas Towers owe a large part of their design to the Five Pillars of Islam? No, nor did I, but we all know now (even if it takes a degree of imagination to see it). 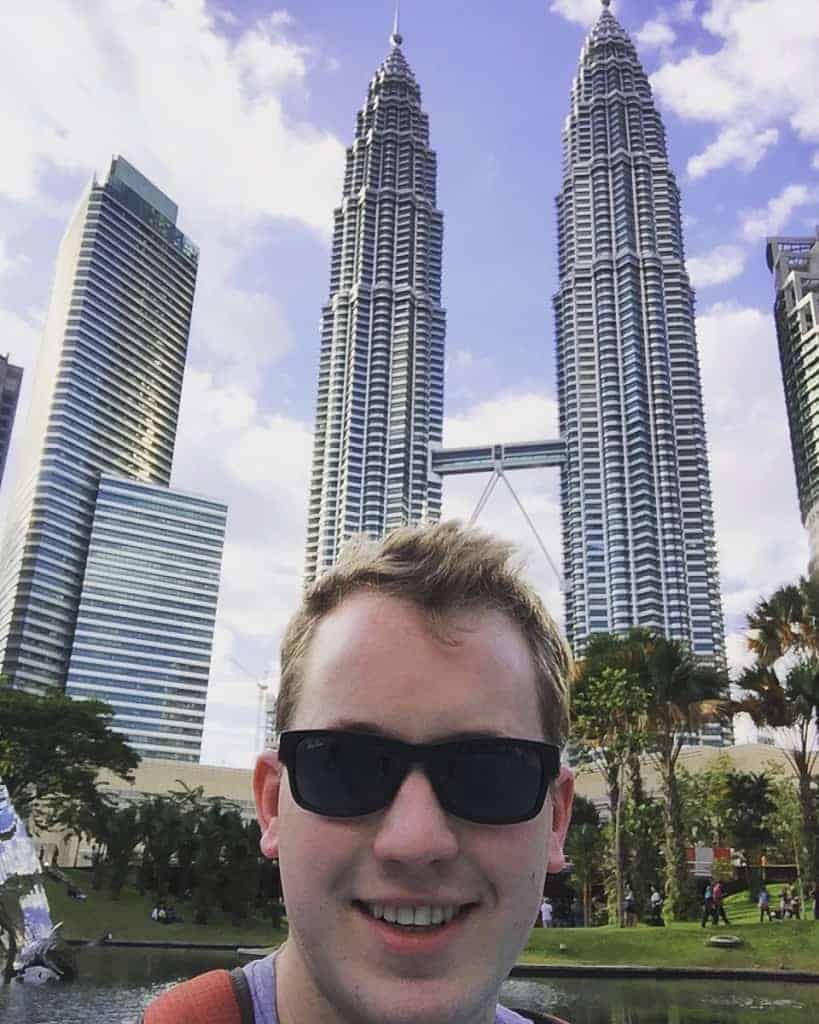 Weird as it seems I actually interviewed for a job here in 2015 (it fell through in the latter stages, sadly), which is in part why I am here – to see what I missed out on. But one of the most appealing things I remember about the potential move was the large number of holidays it offered. As a cultural melting pot, the city celebrates a whole host of public holidays and festivals throughout the year and as it happened I was there for one of the largest – the Hindu festival of Thaipusam. It celebrates the Hindu God of War, Kartikeya, being given a spear so as to defeat the evil spirit Soorapadem. The climax of this festival is centred around KL as devotees carry offerings from the city centre to the Batu Caves to the north where they must climb the enormous staircase to the temple contained within the caves. Often this involves carrying large, ornate containers for this task, or with ropes hooked through the skin of the back to represent the sacrifice of the struggle. 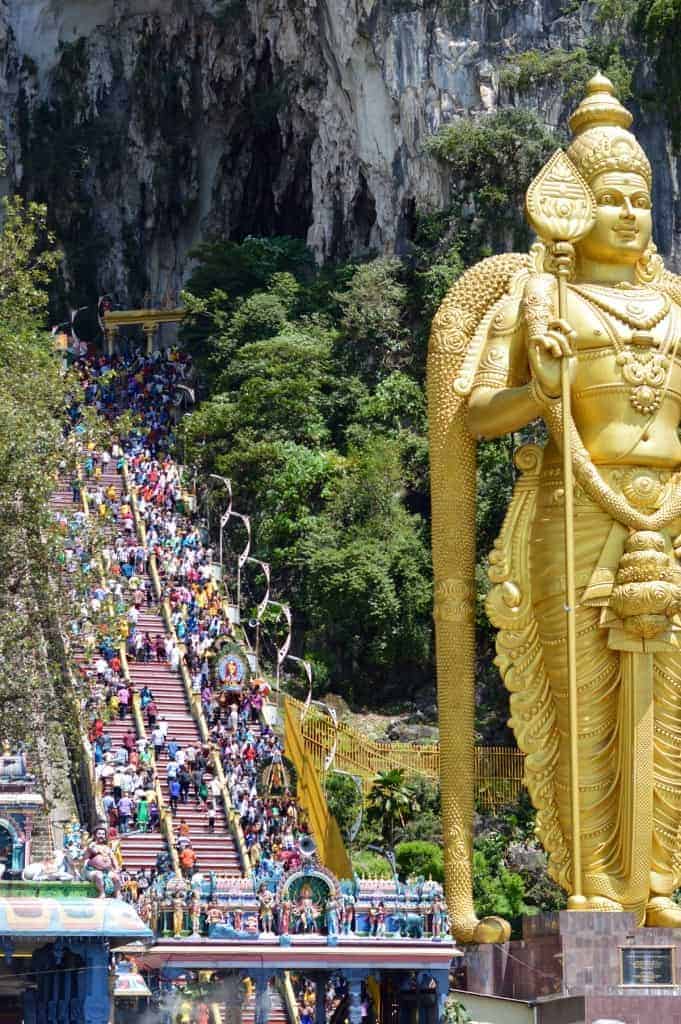 If I’m honest, I found it all a bit much. It was hot (about 33ºC), those steps are a lot to climb, and those devotees carrying the offerings up (having walked from a temple in the city) often need supported so as not to topple backwards down the stairs. Perhaps as someone who is not religious I don’t understand – and that is fine – but to me when there are people collapsing with effort (including those just overcome on the steps not carrying anything) and it takes that many Red Crescent people on hand to ensure it can go ahead, I would think twice. 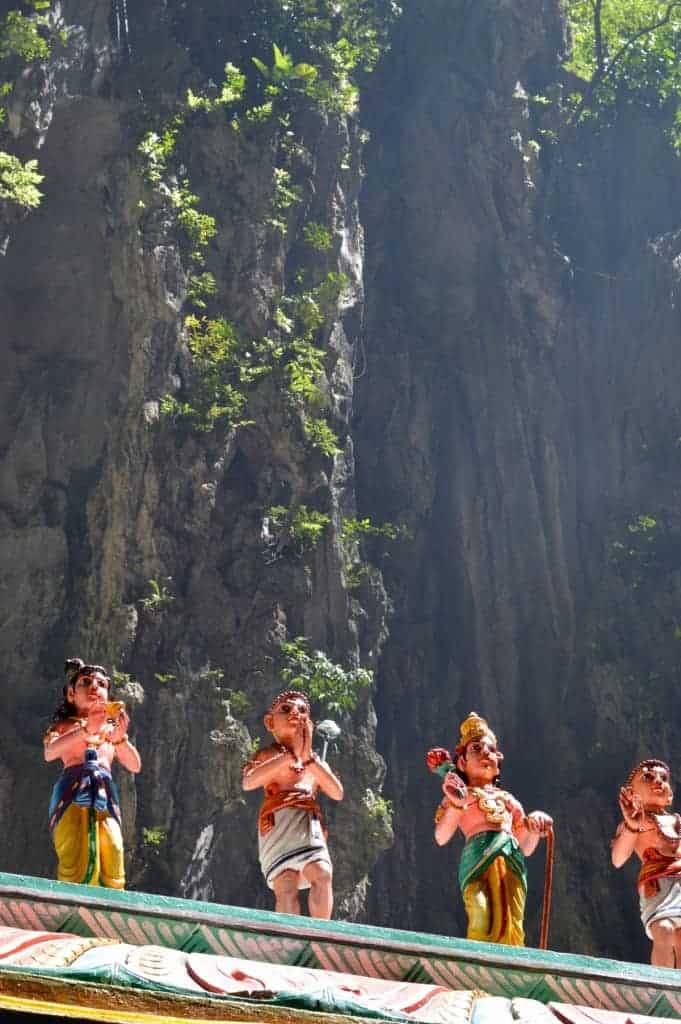 It seemed silly not to see this festival in action, but on reflection afterwards I think I would have enjoyed the spectacle of the Batu Caves much more if I had gone a couple of days later once the festivities were over.

So what does one do when everything closes on a Monday Holiday? Well, it turns out the British left a great tradition that has expanded passed the hotels. I went for Afternoon Tea in the revolving restaurant of the Menarakl, better known as the KL Tower. It was a feast of local dishes and the little cakes and sandwiches one would expect from Afternoon Tea, all enjoyed as the room slowly revolved around, offering 360º panoramic views of the city. Frankly, it was ridiculous; but who’s not prone to enjoying the ridiculous now and then? 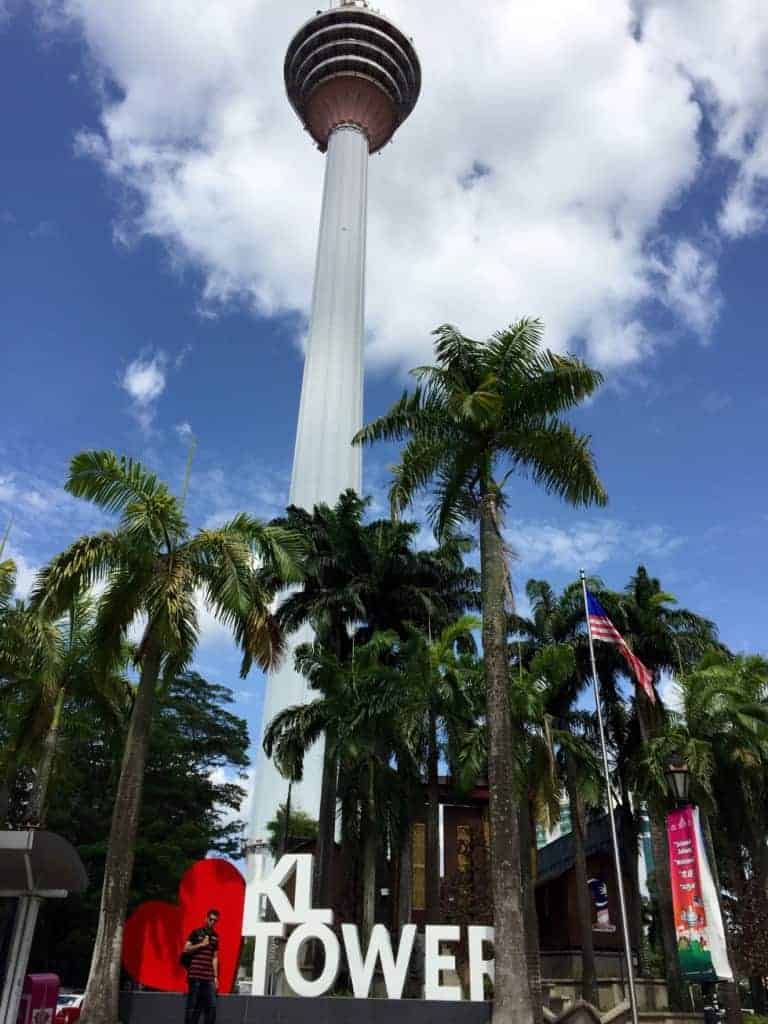 Wandering around it’s impossible not to notice the way the city changes in its different areas. From the Central Market, to Little India and Chinatown, each part of society has somewhere it settles. Curiously this is even true of the colonial architecture. Declaration Square (where Malaysian independence was declared in the late 50s) looks oddly like the village square of a little English village – you almost expect people to be playing cricket in the centre. And Kuala Lumpur Railway Station – where once you could have caught a train to Singapore, before the city outgrew it – is a landmark of true British Colonial design. Its architect based it on an Indian temple (despite the architect never having set foot in India) and, most helpfully for a tropical country, gave it a roof capable of handling large amounts of snow… 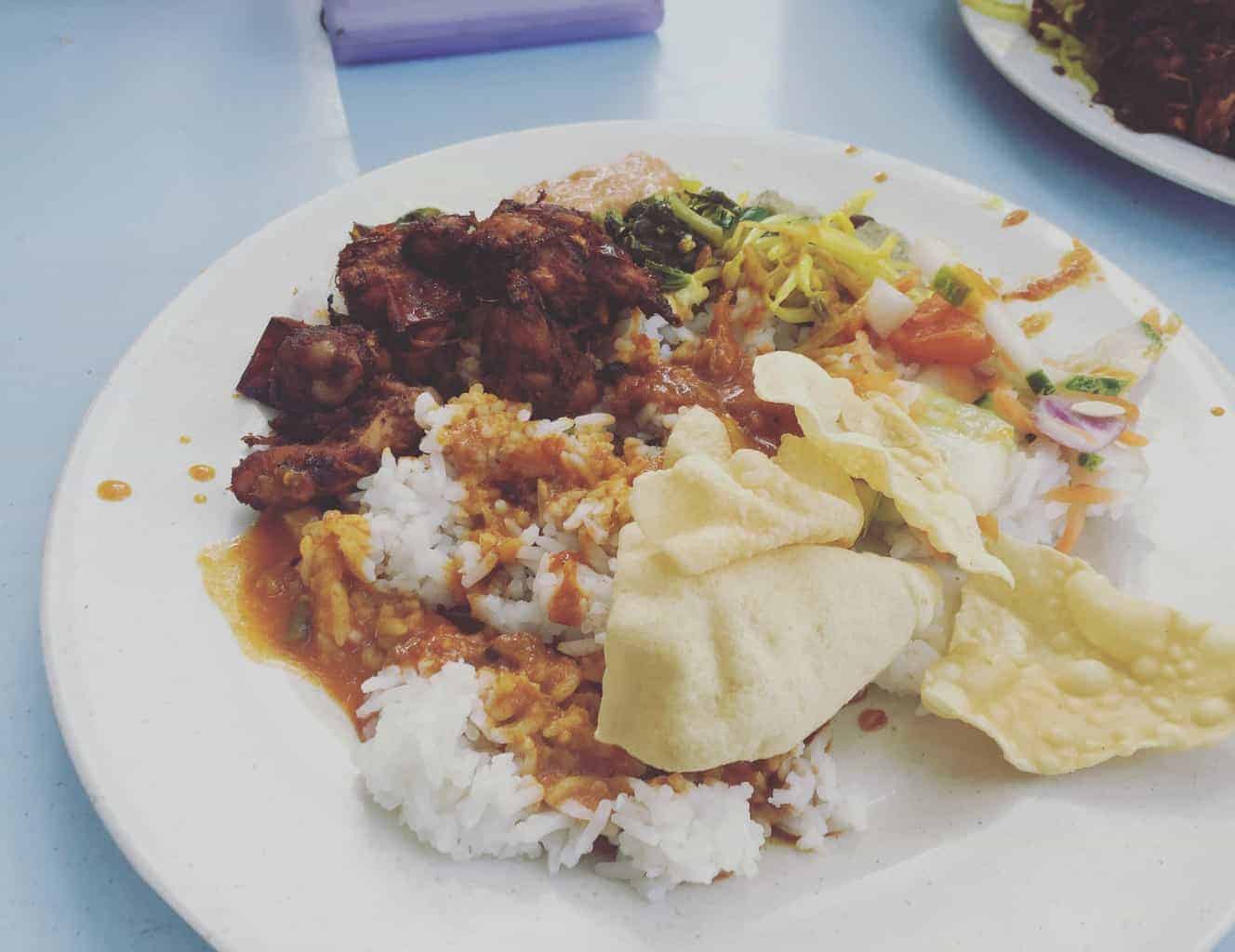 The one thing that is inescapable – and who would want to escape it? – is food. Food, eateries, shops, street vendors, markets, whatever you can imagine, it is all here in KL. I took so many photos that it’ll have to be a separate post by itself, but I think it’s fair to say that I ate more in Kuala Lumpur than I have in any other week of my trip. When there’s this much food and it’s all so good, it would just be rude not to. 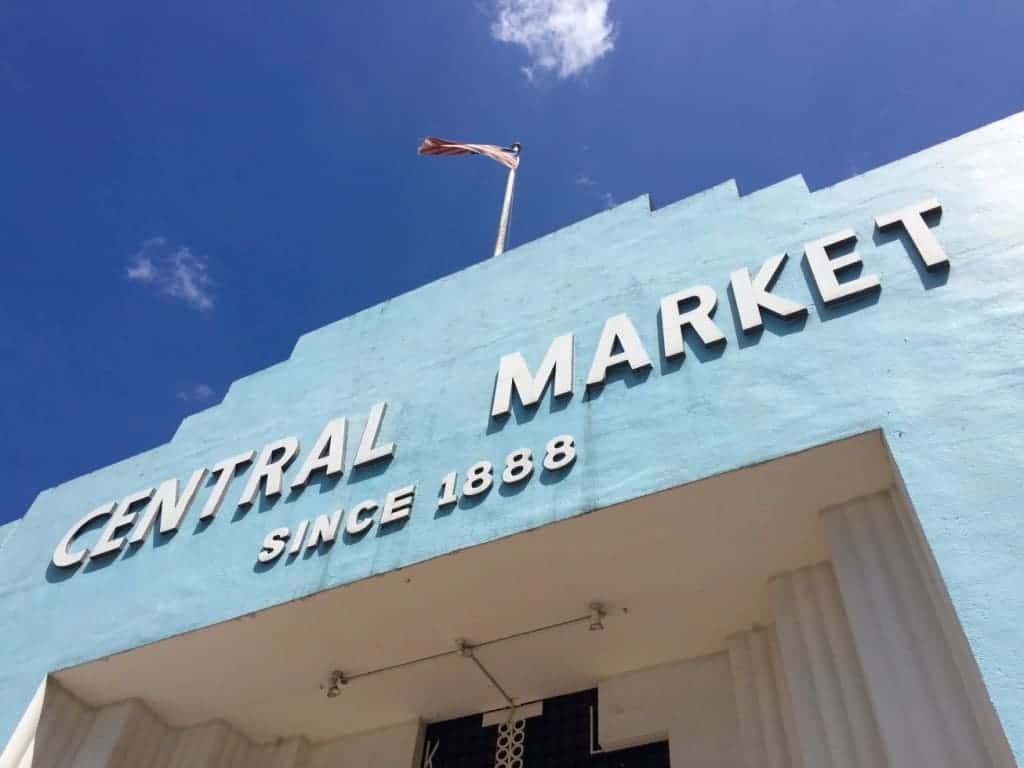 Wandering around the city – perhaps adjusting somewhat to the beat of the city – you notice little things that make somewhere what it is. Kuala Lumpur is a tropical metropolis that seems to be massively under construction. The city is expanding fast, but it doesn’t look as though it is ripping down any heritage of any of its many communities along the way (a rare situation, if true). There is still the Chinese fish market, old colonial architecture, the shrines of various religions – a sense that old KL is all around, as is the modern. In certain parts of town all the shops are now ‘fixed price’, but in others market haggling is still the norm (although I for one would be happy to see the end of physically grabbing someone’s arm as they try to walk away offended at a blatant attempt to rip off the tourist – it wasn’t fun). It’s a sense of ‘old meets new’ in a hot, sticky climate where you’re constantly reminded that it’s been at least an hour since your last meal.

By my last day though I think I’ve mellowed. My itchy feet are calmer. No longer whiter than a sheet, with a large water bottle always by my side, and feed well beyond full, I definitely started feeling like I am cut out for life in the tropics – sad that I didn’t move here in the end. Kuala Lumpur is an incredible city and I had an absolutely fantastic time discovering some small part of it. But there’s no time to wonder about the rest as Australia is calling, and I have a hot date with Melbourne.