I feel like I’ve become some strange first world problems version of Oliver Twist this week. Whilst in Melbourne I seem to constantly asking for a little more. More coffee, More pastry, perhaps just a little more wine…

It’s fair to say that I’ve enjoyed a lot of the places I’ve been so far, but there’s something different about Melbourne that I’ve realised – the feeling that I could quite happily live here.

Clearly my want-to-be hipster is out of control with all these bikes and cafes.

For many Melbourne doesn’t quite have the name recognition of it’s more famous sibling on the East Coast; but whilst Sydney may have the instantly recognisable sights, Melbourne is definitely Australia’s cultural, culinary and sporting capital. 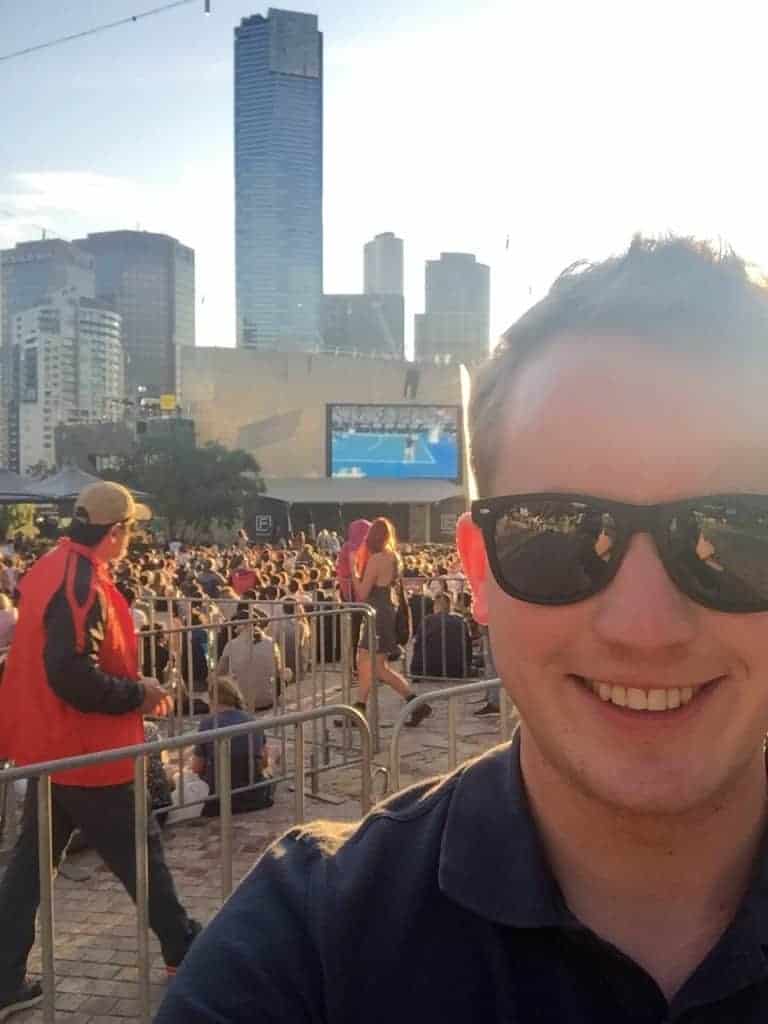 When I got here at first you couldn’t move for tennis chat – which is no bad thing in my books. The Aussie Open (one of the four annual Grand Slams, Wimbledon, Paris and New York being the others) was entering its final stages in my first few days and it was strange to watch the women’s final in the same timezone and for the men’s just a couple hundred metres away from where it was happening! In fact it was a great lazy sunny Sunday evening in Fed Square watching Murray sadly not quite able to unseat Djokovic.

There’s also constant chat of cricket here and Aussie rules football – both of which are played in the MCG (Melbourne Cricket Ground), just beside the National Tennis Centre – and you can’t walk down the side of the beautiful Yarra without seeing cyclists and rowers. It’s a super sporty place, Oz may have a serious obesity issue but Melbourne is super gym fit to an almost intimidating level (naturally I dealt with this by ordering another coffee and a slice of cake).

The centre of the city is pretty compact, which makes it a pretty amazing place to just wander around. From the golden facade of Flinders Street Station, to the 19th century ornate arcades, its eclectic styles of modern architecture (some of which is definitely better than others) and elegant state buildings, Melbourne is a beautiful city. 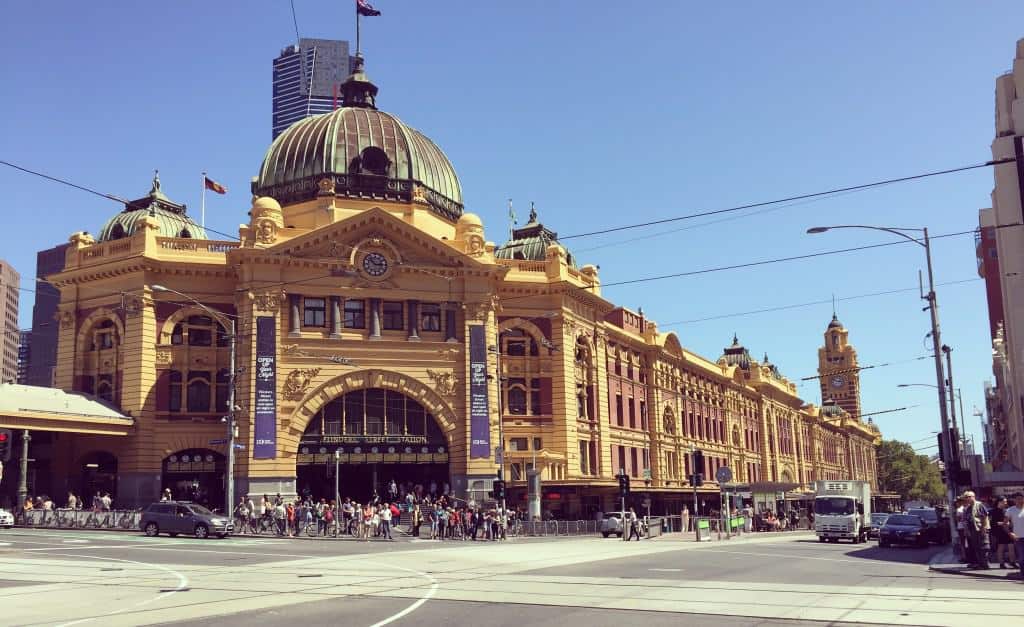 Once – or so they claim – the second city of the Empire, shortly after the area around the city split from the colony of New South Wales (i.e. Sydney and around) to form the colony (now state) of Victoria, gold was discovered. A lot of gold, one of the world’s biggest gold rushes. Melbourne blossomed with all the money that flooded the city, which resulted in stunning architecture of every day buildings, huge shopping arcades, elaborate theatres and the enormous exhibition hall. Of course, these things never last and Melbourne has since sunk back to the shadows a bit, but the legacy of the gold boom times remains in place, helping to make Melbourne an enchanting, very European feeling, city. 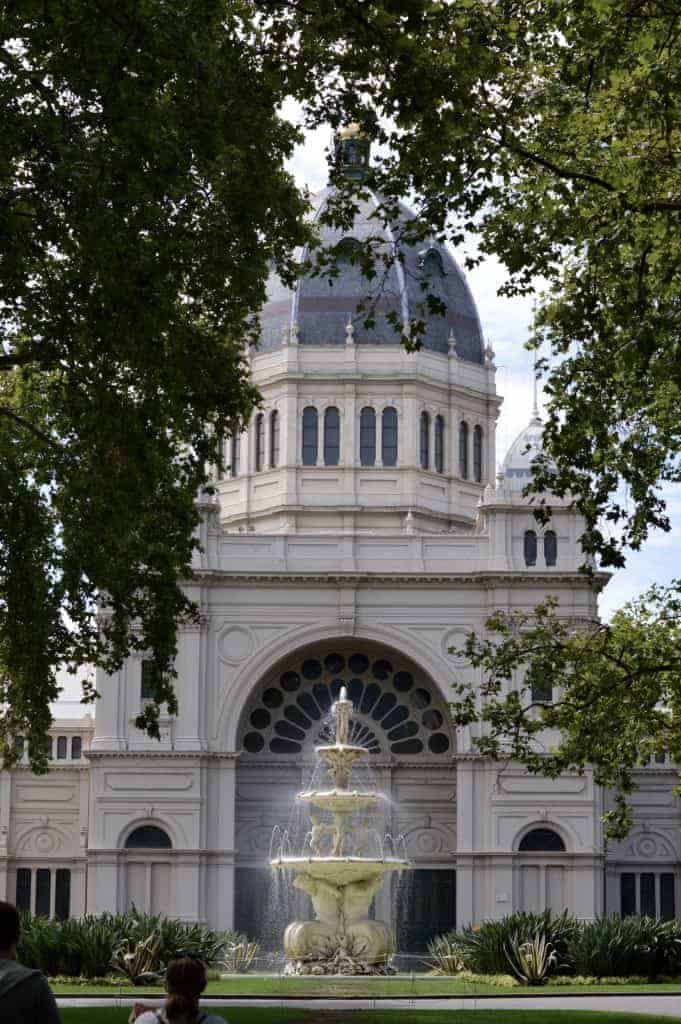 The city’s library – and now the Victoria State Library – sits not far from what was, for a time, Australia’s federal parliament. It’s a brilliant building, packed with stories and history as well as one of the most stunning reading rooms around. It’s as much a museum as a library, using its galleries to tell stories of the founding of Melbourne (which naturally involves people taking advantage of local indigenous people, as these things tend to), the body armour of the notorious Ned Kelly (a Robin Hood style bandit  for Down Under), and a brilliant collection of vintage advertising from the city. Given that it was thundering with rain outside, this was a perfect distraction for a couple of hours.

The focal point of the city is around the Yarra River, as it snakes its way through the city. On one side the South Bank stretches out along, well, the south bank (it’s bars, restaurants and the opera house-come-concert hall; essentially it’s like London’s South Bank), the other is home to Flinders Street Station and Federation (Fed) Square.

If you’ve ever seen a photo of Melbourne it’s likely to have been of Flinders Street Station. 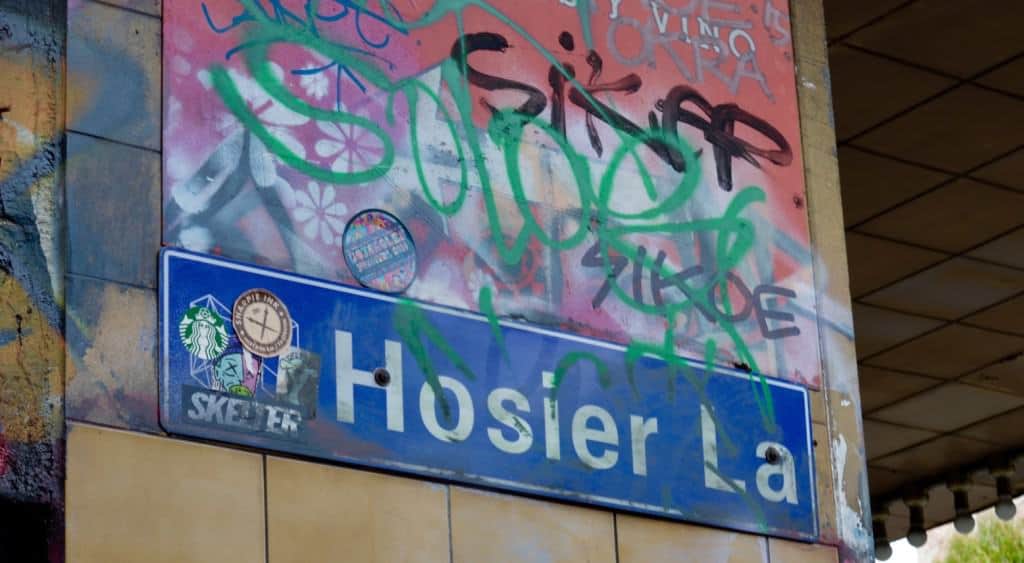 Graffiti is naturally illegal in Melbourne, but this city is home to some of the best ‘street art’ (an excellent case of rebranding for a better image) I’ve seen. The city has a lot of little streets and alleyways, which I guess makes it a natural fit for this sort of thing. Naturally some of it’s utter rubbish, some is attempting to be poignant, and some of it is actually pretty good. Except the grammar; that was almost universally awful. 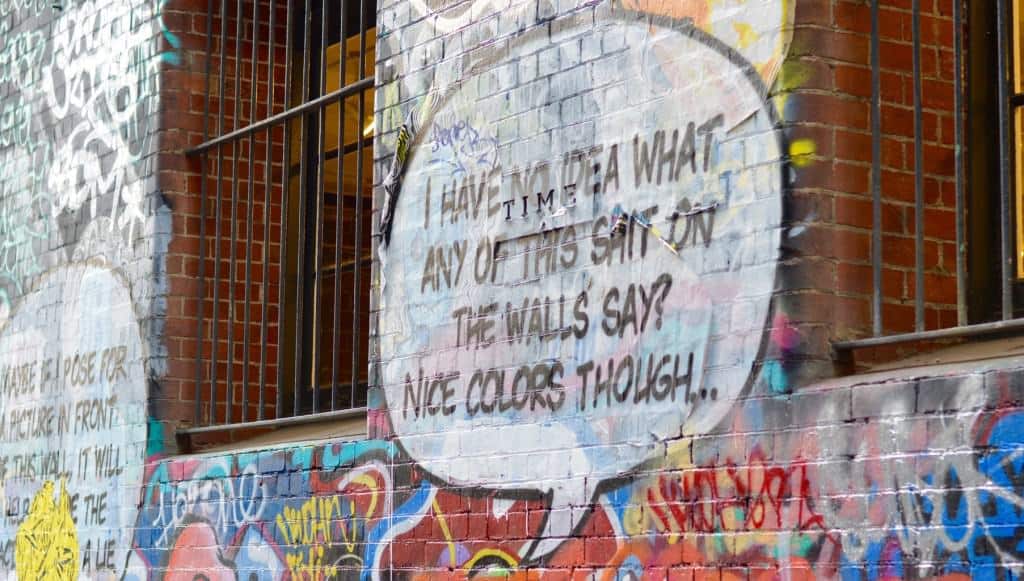 One of my favourite days I spent in Melbourne was also probably one of the sunniest. The rest of the city seemed to have the same thought as I did and the population seemed to move en masse towards the city’s beaches.

St Kilda definitely harks back to Melbourne’s (literally) golden years. It is, for the most part, what we’d probably describe as ‘Victorian’ (and here geographically still is Victorian) seaside resort, but with a modern boardwalk and cycle paths leading all the way down the peninsula to Brighton Beach and beyond. Leaving plenty of opportunity for people who look like they’re auditioning for Jersey Shore to strut about comparing bikini tan lines and the like. I opted for some gentle strolling down the boardwalk before using the bikeshare scheme to cycle down the coast to Brighton Beach to see those famous painted beach huts (only to discover my camera battery was dead).

More importantly, St Kilda is also home to some of Australia’s penguin population. Nestled in amongst the boulders of the breakwater the Little Blues hide out. It was a bit hot for them when I was there – I suspect most were out at sea avoiding the heat – but this little guy was chilling out. 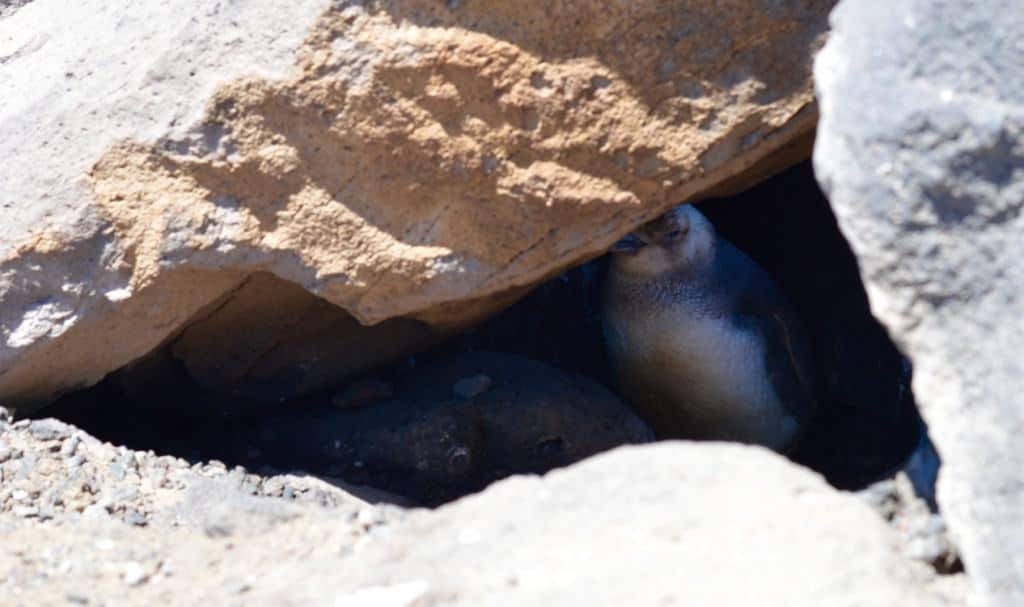 Without a doubt this is the part of town that would call itself the coolest, if such a label wasn’t way too conformist for its inhabitants. It’s the part of town where the hipsters gather (my natural brethren, I’m sure we can agree…) they look pretentiously through record shops that probably paid a fortune to have the paint peeling from their walls, gaze through the windows of the vintage boutiques, and naturally there was someone on a unicycle.

But they have great coffee and this is where Melbourne flocks at the weekend for brunch. We can chat food some other time.

If it’s not already quite obvious, I really love this city. Melbourne is the right mix of slightly mad, foodie, and full of green open spaces that really appeals to me. The fact that one of the places I stayed (a hostel no less) had a roof terrace where you could watch the sunset from the comfort of the jacuzzi was just an added bonus.

The way it’s made up of lots of separate little communities reminds me a lot of home, the ways of exploring the city and beyond by bike made me wish I had mine, and let’s just not talk about how long it’s been since I’ve lifted up a tennis racket.

Let’s put it this way, I’m pretty sure that I will be in Melbourne again – it’s more a question of how soon. 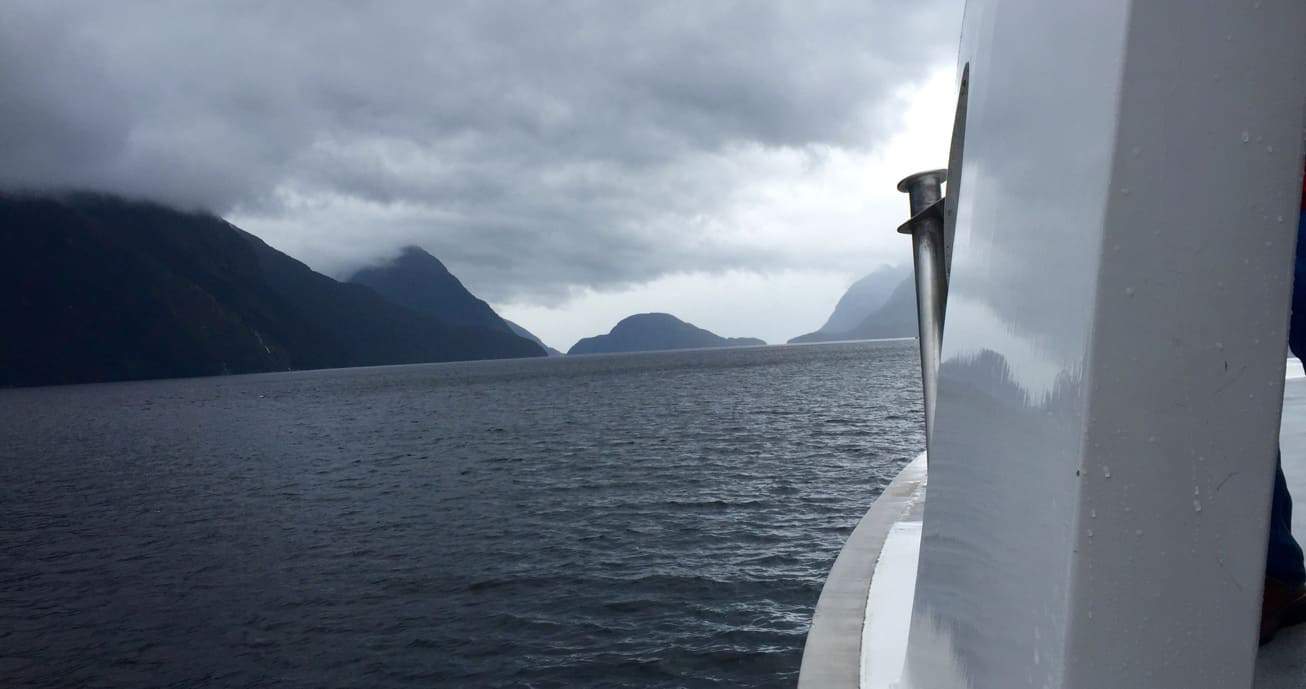 Travel and adventures
Sydney: Highlights of the Over-Hyped 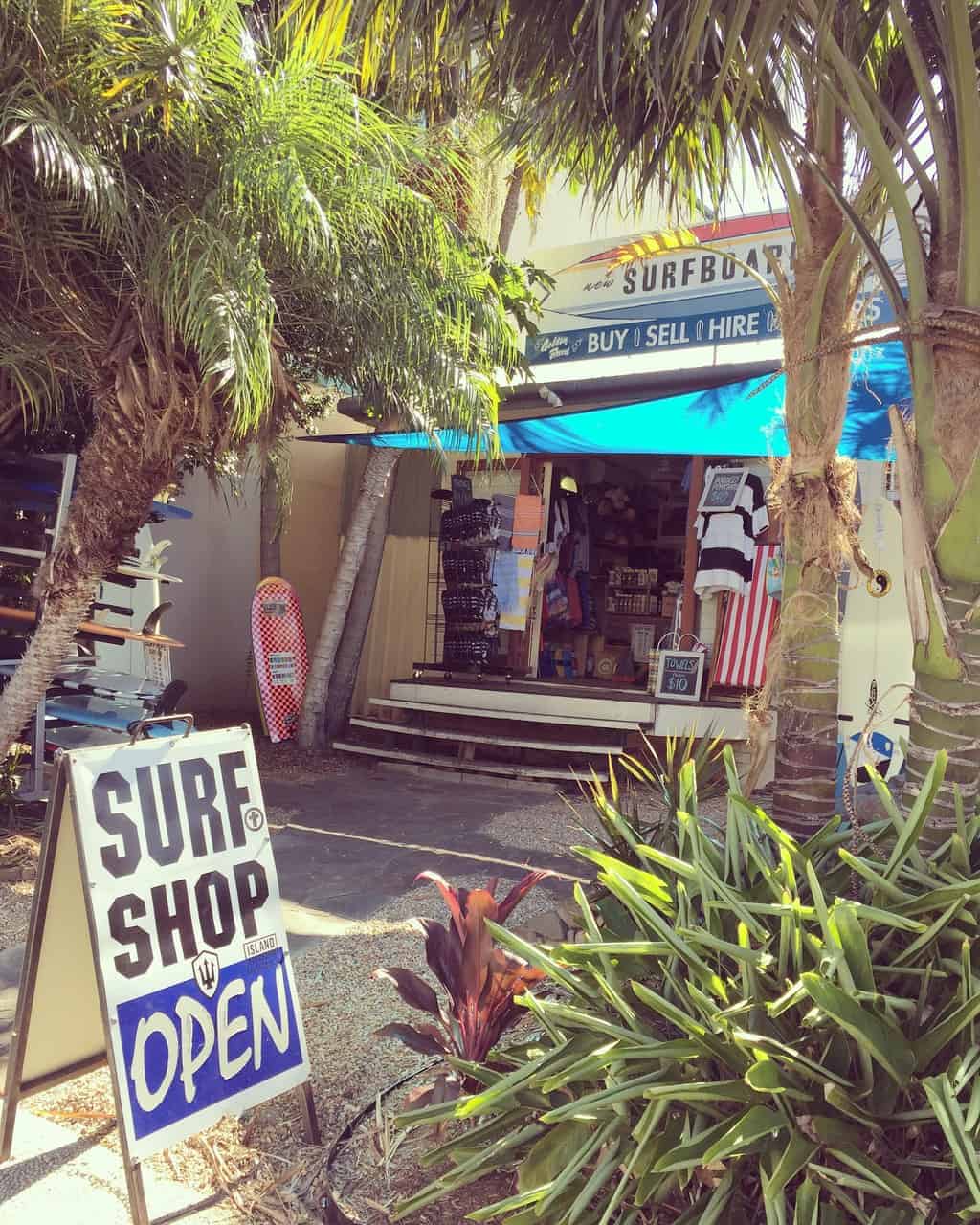 Travel and adventures
Getting My Surf On: Byron Bay