“Here in Kuala Lumpur we only really eat one meal a day” my heart rate has suddenly gone up massively as our guide, Dani, has spoken. I’m not one to panic, I take most things in my stride, but being told I am only going to eat one meal today is making me very nervous. This trip is all about eating Kuala Lumpur – one meal a day is not going to cut it.

Then there’s a wry smile, as if the panic is writ large across my face: “it starts when we get up in the morning and ends about when we go to bed!”

I knew I liked Kuala Lumpur.

Then a moment later another thought crosses my mind – if it ends “about” when people go to bed that must mean late night in-bed snacks… but anyway, let’s not digress too far.

Malaysia, and Kuala Lumpur in particular, is a cross between Malay, Chinese and Indian cultures, and the culinary love child this has produced is beyond fantastic. I decided to go on a tour of the various food markets to get a better idea of the city’s layout (because what better way is the to do that than through food?). It was to be a tour along the side streets and roadside stalls to discover some local gems and how to tell the difference between the places that don’t look promising but are amazing and those you’re best avoiding. This lead to six days of some of the best eating I’ve ever had.

So between Little India, Brickfields, Chinatown, the Central Market, and across the rest of the city I spend days wandering, occasionally snacking and generally having about five meals a day.

Brickfields has historically been where the Indian population of the city has been focused (although today there’s ‘Little India’ as well). It leads to a riot of colours and all manner of delicious smells. My first instinct was that people were bigger in this part of town, perhaps explained by the fact that the default option for most things here is ‘fry it’. 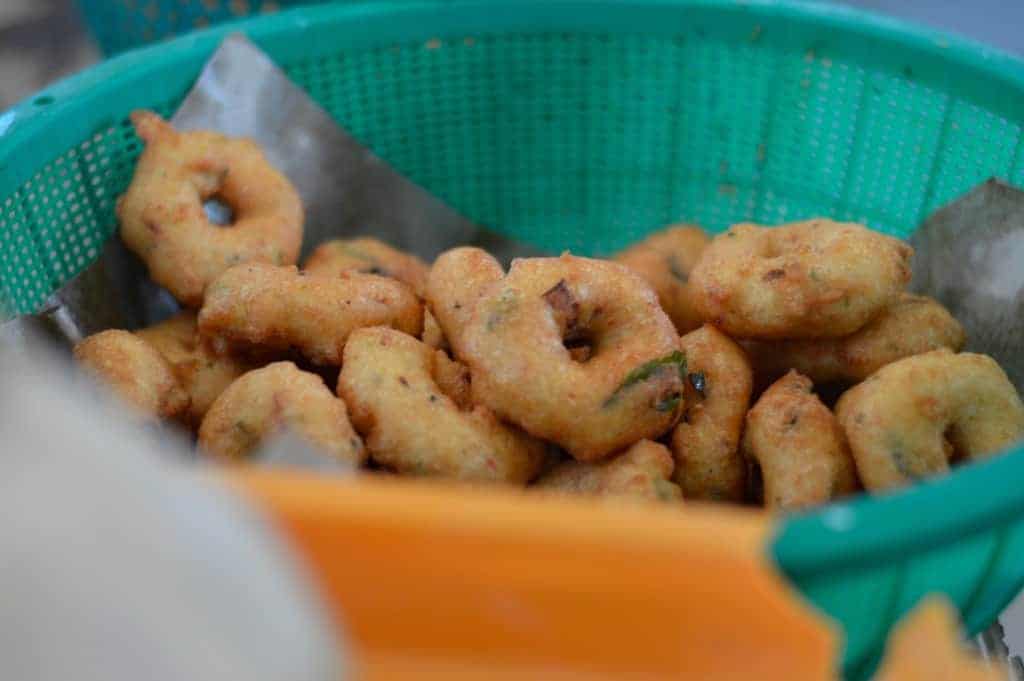 Dani took us to her favourite street corner stalls, one which is now 35 years old and on to its second generation of family ownership. Here we have to queue a bit, but soon are taken behind the tarpaulin to see the kitchen hard at work. Little Cornish pasty like parcels full of spiced greens, savoury doughnuts, chickpea fritters, Dahl turnovers, and so much more sit in baskets around the place, all cooked within the last hour. All to be sold within the next. We get a little brown paper goody bag and are on our way. The bag’s contents are without exception delicious, the savoury doughnut the highlight, packed with herbs and spices. 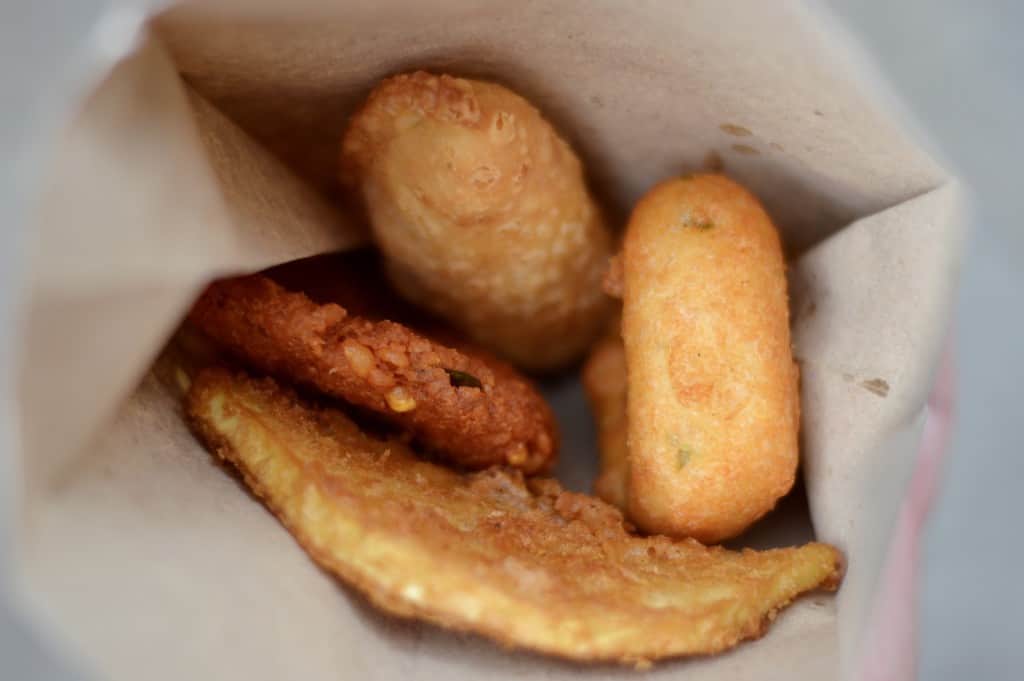 Next stop is banana fritters, because what could you want on a hot day but a spiced, deep fried banana? This package of sweet, crisp batter filled with a boiling molten core of lava-like banana was good, an interesting sidestep in the day of savoury delights, but at the end of the day not quite as special as I might have liked. 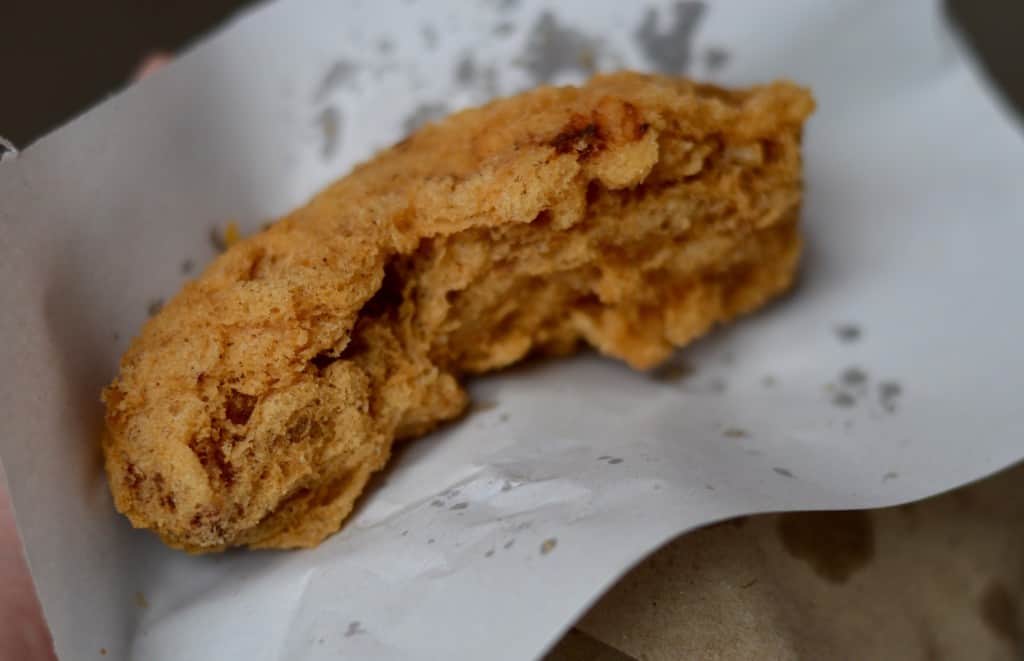 One local sweet treat that people flock to Little India for is something that can only be described as cookie dough-esque (and yes, in case you hadn’t guessed I’ve forgotten it’s actual name and can’t find it online). The only difference is that it’s made with chickpeas! We stopped at apparently one of best confectioners in the city for some. Turns out it is indeed just like cookie dough! But it is super sweet. Like, sweeter than you can comprehend sweet. This particular confectioner had made varieties with ‘about a third of the normal sugar content’, but after two or three bites it was too much sweetness for my cake and dessert loving mouth. You buy them normally in fours or fives, goodness knows what the dentist bills are like, but also explains a few things about people round about. 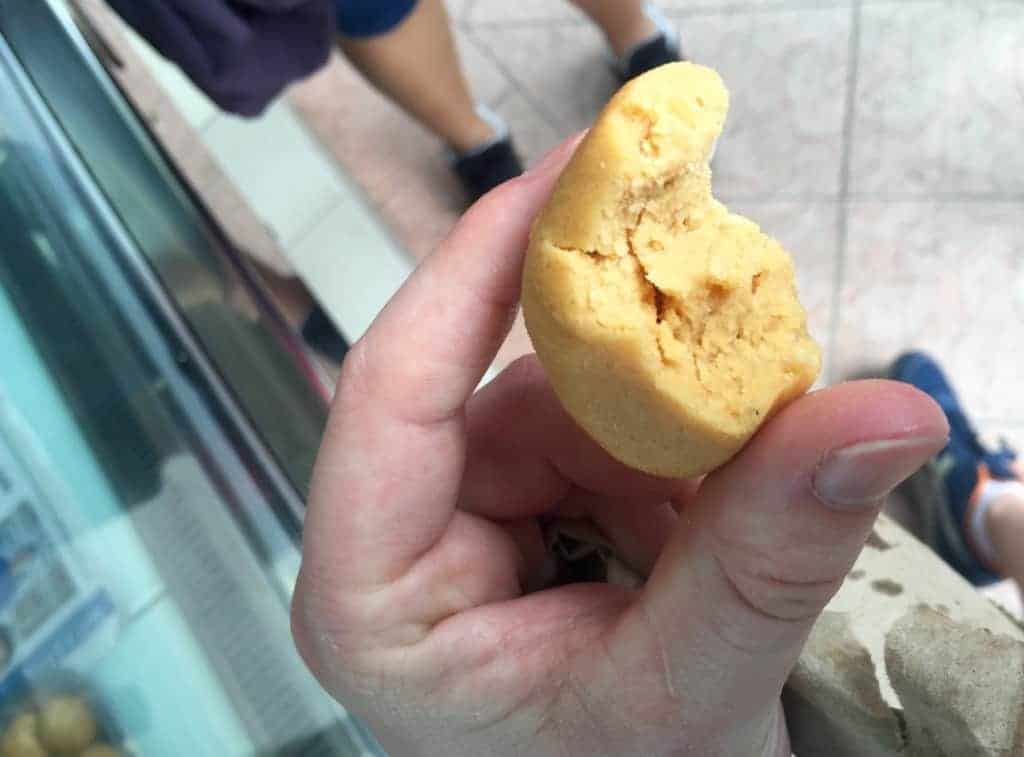 There’s an old joke in our family about not knowing what to have so having a plate with a bit of everything, but at a corner cafe (think portacabin with a side missing, mismatching plastic garden chairs and tables, all under an awning tied to the trees) the dream plate is still very much alive. Since we haven’t eaten enough yet it’s a full plate for lunch, eaten (as tradition dictates) with the fingers of your right hand. Three curries, two pickles, beansprouts and the house speciality of Spicy Indian Chicken all on one plate, and so delicious it has to be made room for. I wish I could cook like this. 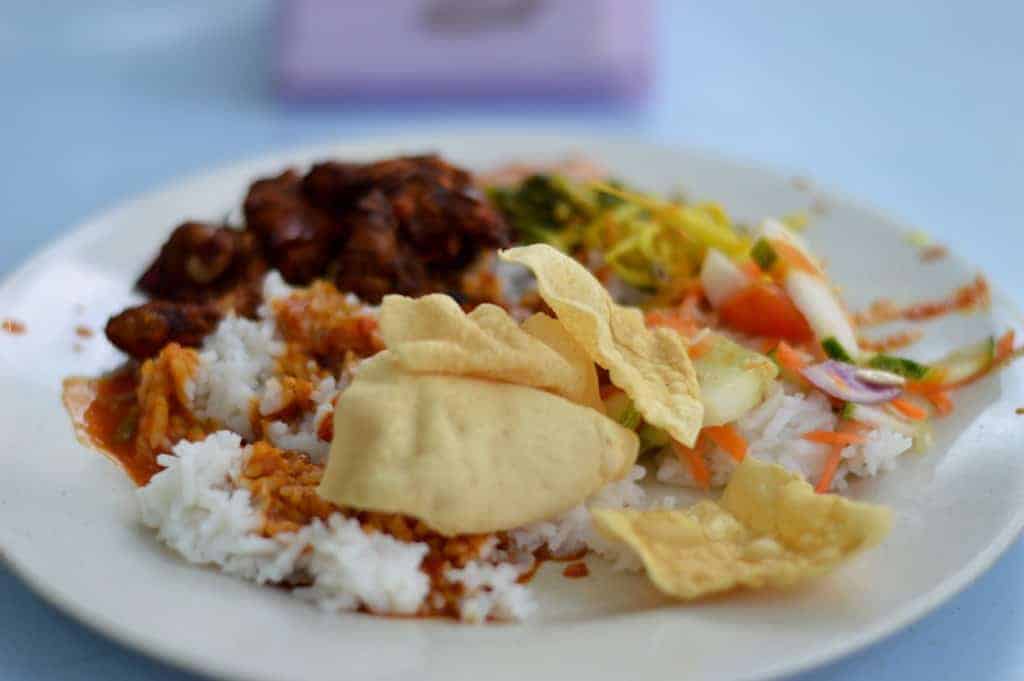 The afternoon is pretty hot and quite humid (there was to be a pretty impressive thunderstorm that evening) so we stopped for one of KL’s newest – and judging by the queue, most popular – stalls. It serves two things: coconut rice bowls or iced dessert. We were to have the latter, which was something between a kind of jelly, a slushy and granita. I am aware that sounds utterly revolting, but it was delicious. Made with icy coconut milk, a citrusy jelly and a natural setting agent from a plant the name of which I forgot instantly; it was surprisingly rich and by this point I could manage only a few mouthfuls, but it was fresh, cooling and surprisingly tasty. 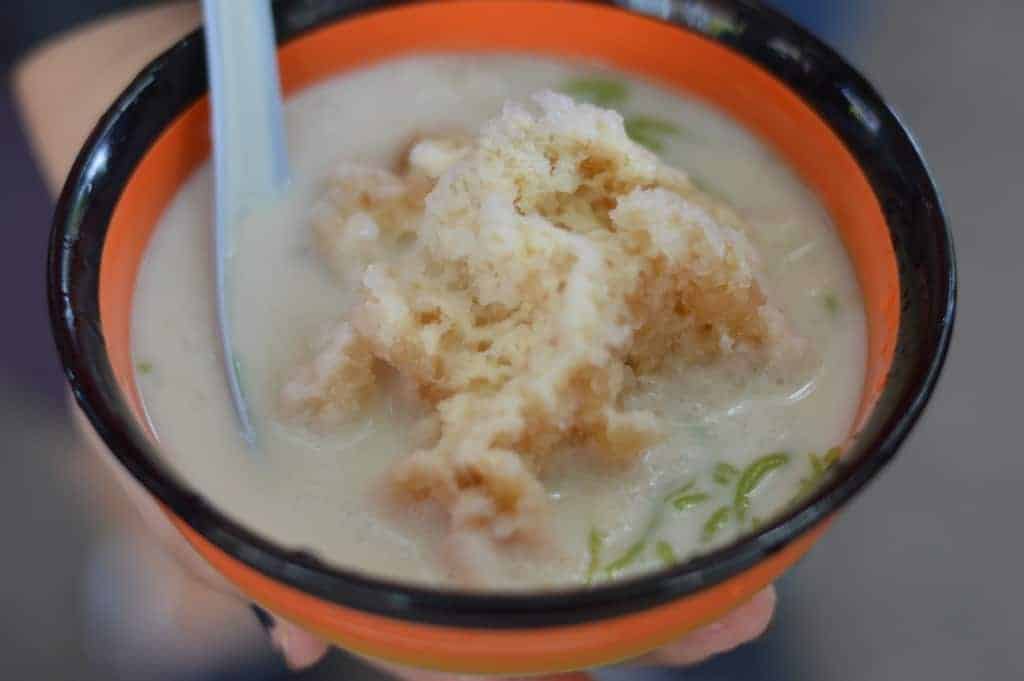 And with a slurp, I’m afraid I am too hungry to continue. This adventure of the taste buds will continue in a couple of days when I have a chance to write about it. In this there will be China Town, fish markets, watermelon and much more!