Chinatown feels like I’m in the back streets of Shanghai again. But it’s definitely a foodie trip to Kuala Lumpur that I’m on. The little shops are crammed into impossibly small places, and the fish market has stacks of any number of kinds of fish around. And of corse the smell that only a fish market can have. 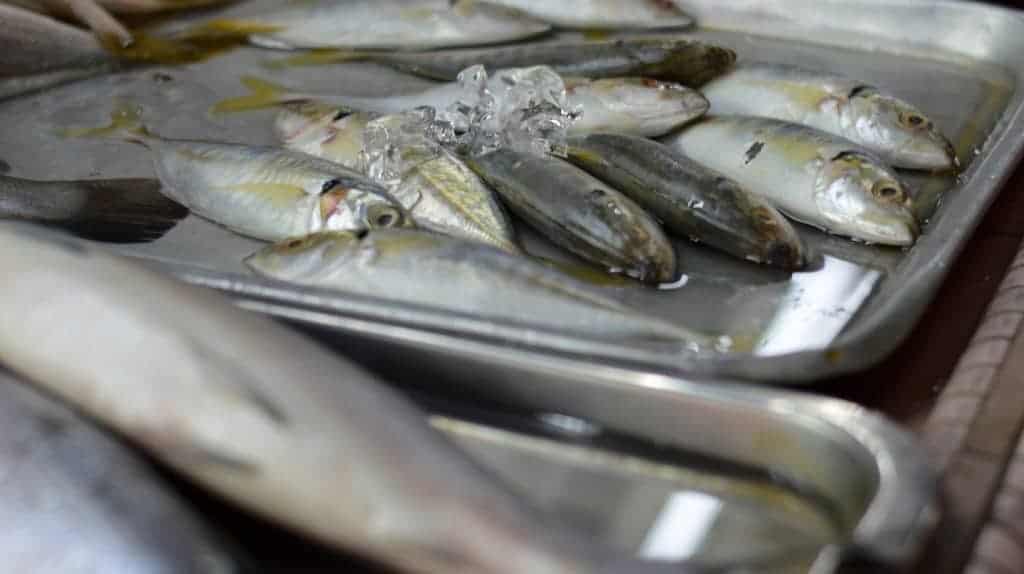 But the best place here is an unassuming, fromica-topped table crammed place that seems to have walls made of mirrors and varying shades of faded brown plastic. Here it is all about the beef noodles. There are three types of noodle (egg, flat and glass) and then beef slices, balls and offal, topped up with a stock for the full experience and garnished with spring onions and a spice paste. Chopsticks and spoon at the ready I dived in, slurping and trying to control my noodles (a futile mission; with the slickness of the stock it was like taming a bowl of eels). It was spicy, salty, rich, hot and so incredibly more-ish that it was hard to stop. A few mouthfuls in all thoughts of the decor were forgotten. 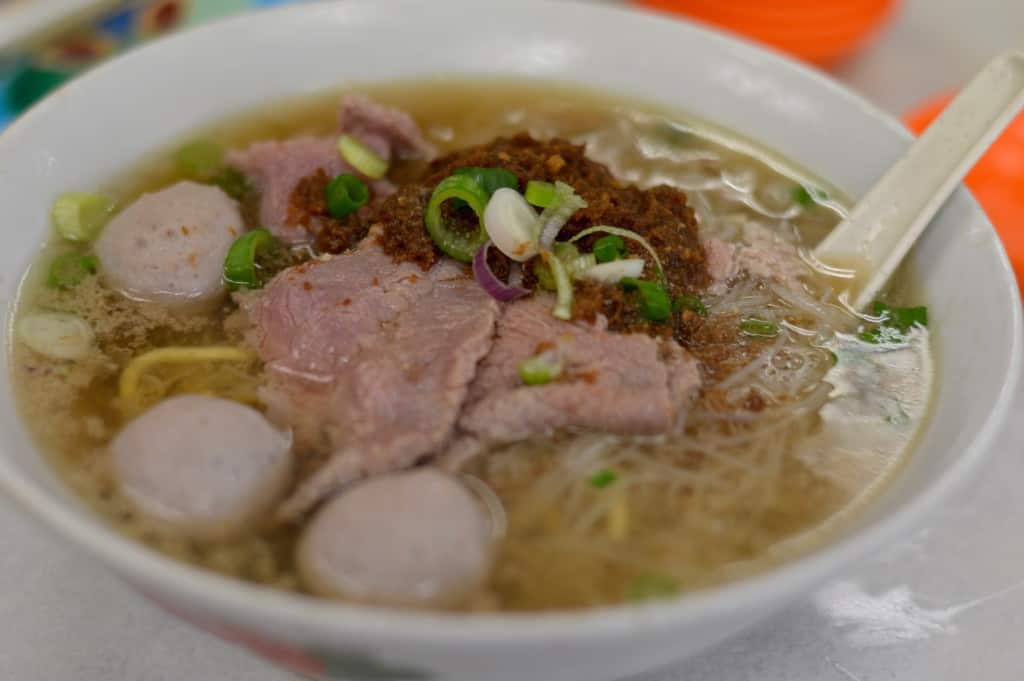 I’m not one for buffet style places – on the whole they are terrible – but as we had passed through the city centre on the walking tour one such place had been pointed out to us. “It’s where we go when my friends and I can’t decide what we want to eat, they have a bit of all Malay foods. Don’t be thinking it’s high class with it’s China plates, that’s new and I think so you eat less and take more photos of it.” If it’s good enough for our foodie tour guide then I figured it must be ok (and I totally feel for their photo taking stunt). I didn’t have enough time in Kuala Lumpur to eat all the kinds of food I’d seen, so tried it out on my last night. Chilli and lime-like-citrus tempura prawn, ‘Malay style Beef’ (peppercorns, essentially), chilli fried fish (the unnamed species of fish described to me as ‘like your sea bass’), tomato and pepper rice, and a variety of tempura-battered and lemongrass-steamed vegetables featured on my plate. I perhaps tried about a quarter of the dishes on offer, each being better than the last. 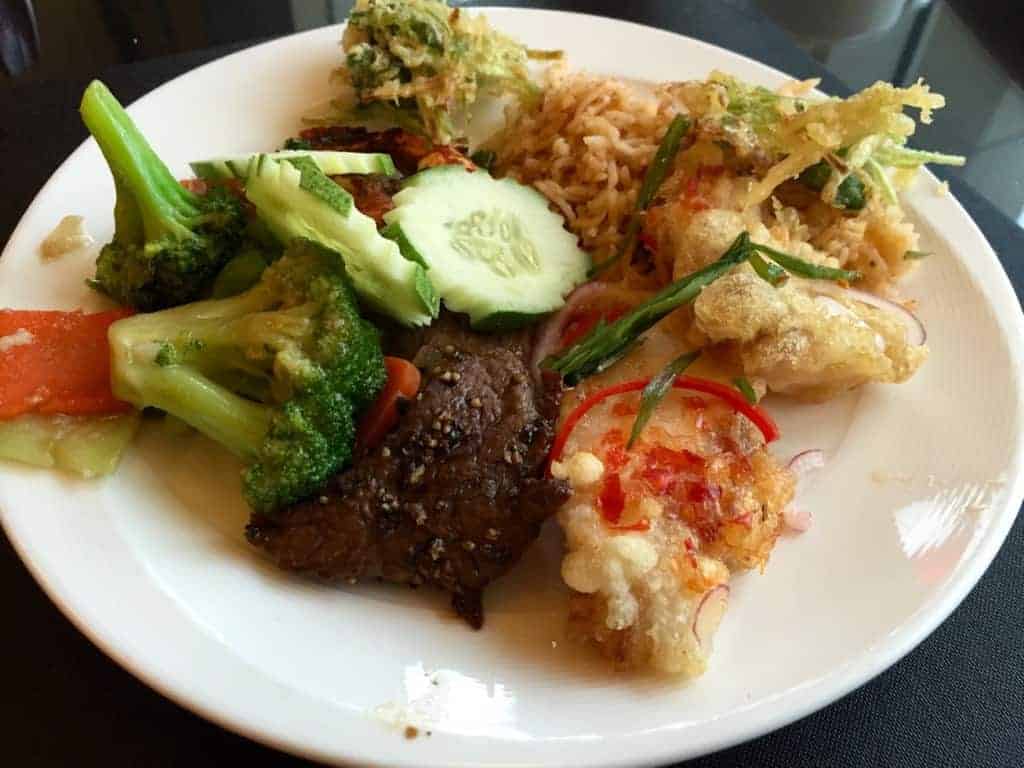 One of the most pervasive types of dishes is Nasi Goreng, essentially the umbrella term for fried rice dishes. Whilst the scope for these is huge, from what I saw they are mainly served with beef, with chicken versions if you don’t eat beef for religious reasons or are a vegetarian (I watched a hilarious conversation between an American vegan and a stall holder about this and couldn’t help but laugh). I had several Nasi Goreng whilst in KL, but I think my favourite was beef, chilli and lemongrass – I will have to find/create a recipe when I get home. 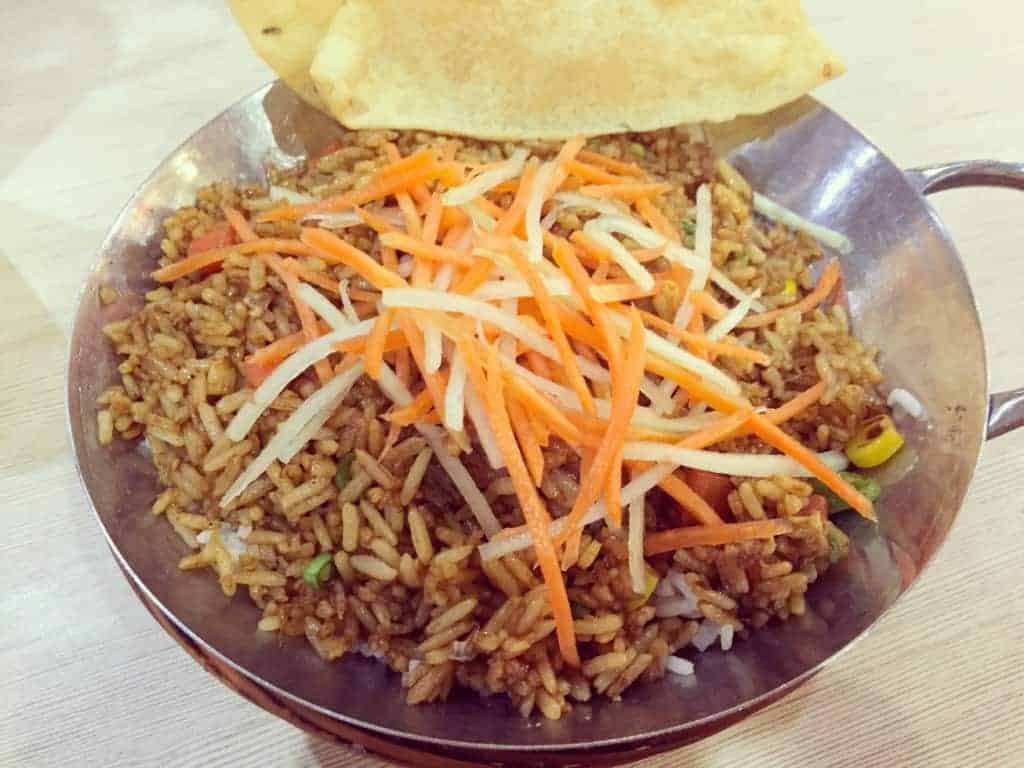 There’s also a deluge of fruit here. It leads to a brilliant array of brightly coloured stalls on the edges of the markets. Big ice boxes full of little bags of fruit (delicious a concept as it is, the environmental consequences aren’t exactly great – sustainability hasn’t quite got to Kuala Lumpur yet). Chilled, cool, healthy and refreshing, walking down the street with a pack of watermelon pieces and a little stick to eat with is much better than a packet of crisps, and here costs the equivalent of perhaps 8 pence. I am a fan. 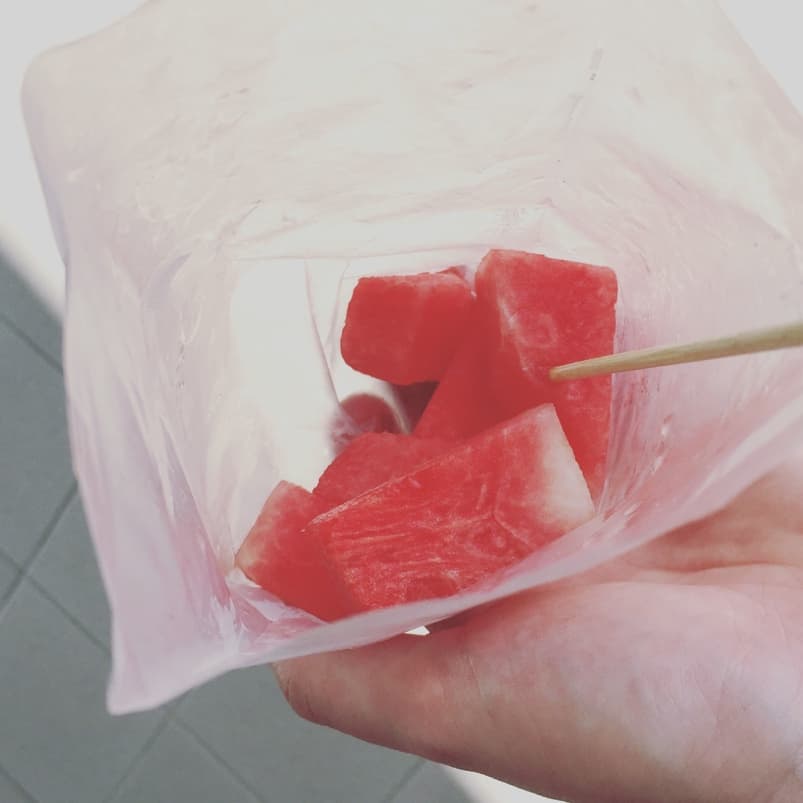 It can’t all be a success…

If there’s one thing that I will be politely turning down from now on I think it would have to be fish balls. Much as I like pretty much every kind of fish I’ve ever eaten, these are not my favourites. Actually – let’s not mince words like they were bits of fish – they were disgusting, but ever the polite young man I pretend to be I did eat it all. Essentially, or at least from what I can make out, it’s white fish (or multiple kinds, for all I know, and I suspect from less prime cuts of the fish) which are then pulped or blended a bit and then squished into something roughly the size of a pingpong ball before being boiled. It was the squishy-flakey-rubbery texture I had an issue with more than the flavour (although they were also a bit salty for my liking), but we can’t like everything can we?

There is one sad story that’s changing the city though. Running a food stall or a small restaurant is hard work, long hours and often seen as quite a ‘working class job’. Kuala Lumpur is growing, and growing really fast with lots and lots of opportunities opening up to people as the city develops. Many of the cafes and stalls have been passed down generations of the same family, but with development and the opportunities available to them my generation are often changing their fortunes and ignoring the path that was set out for the last few generations. It’s hard to blame anyone for wanting to better themselves and change their fortunes, but at the same time it’s sad to see boarded up windows or hear ‘there used to be a great curry stall on this corner…”

On the upside though, this change of generational outlook is leading to success stories. People are trying bold new ideas on stalls, knowing they can fall back on something else if it doesn’t work, others have studied abroad and discovered the joy of coffee shops, and families who once had street corner stalls are opening restaurants. The old ways are not dying out, but there’s a change happening in this city and I suspect it’s going to have a delicious outcome.

And so ends the brief but delicious experience that was Kuala Lumpur. Now it’s time to get grumpy about the inefficiency of airports (and the raging stereotypes you find in them) and head down under to get a caffeine fix in Melbourne! See you in ‘Straya! 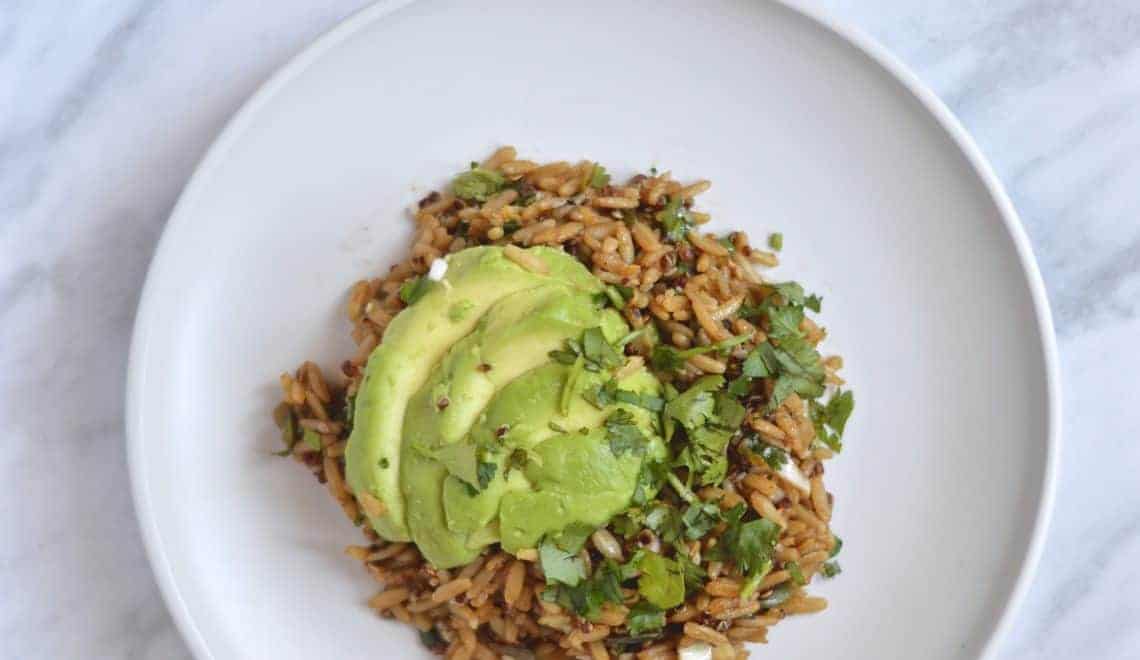